(ATTN: UPDATES with reports of a joint press conference of the leaders, more details, changes throughout; ADDS photos)

The joint call for efforts to expand trade and economic cooperation between the countries came in a bilateral summit held at the Istana, Singapore's presidential palace.

"Singapore and South Korea have a lot in common. The countries both achieved extraordinary economic growth through investment in the people and ceaseless innovation. They have worked together with a common goal of a free, open economy and peace and stability in the region," Moon said in a joint press conference that followed his summit with Lee.

"Today, Prime Minister Lee Hsien Loong and I discussed specific ways to further upgrade the countries' ties into a future-oriented relationship," he added. 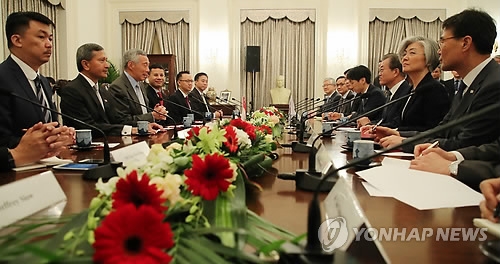 The South Korean president arrived here Wednesday on a three-day state visit, the first of its kind by a South Korean leader in 15 years.

The Moon-Lee summit followed an official welcoming ceremony and a separate meeting between Moon and his Singaporean counterpart, Halimah Yacob.

The leaders agreed to first expand the countries' exchange of people, which came to about 850,000 in 2017, according to Moon's presidential office Cheong Wa Dae.

"We will start with expanding the exchange of high-level officials, including the leaders," Moon told the joint press conference, adding he has invited the Singaporean leader to visit his country in the near future.

They will also strengthen the countries' economic cooperation in a way that will actually benefit the people of both countries, Moon said.

"Today, we agreed to greatly expand our trade, which currently remains at around US$20 billion, and further promote investment by quickly concluding talks on revising the double taxation agreement," he said.

The countries will also jointly seek new business opportunities in building new smart cities in other countries, including the nine other member countries of the Association of Southeast Asian Nations (ASEAN). Singapore is currently serving as the rotating chair of ASEAN.

"Exactly one month ago today, the historic North Korea-U.S. summit was held in Singapore. (We) agreed to strengthen our joint efforts for regional peace and stability. The area of our cooperation will even be expanded to non-conventional areas, such as maritime security, cyber security and the environment," the South Korean president said. 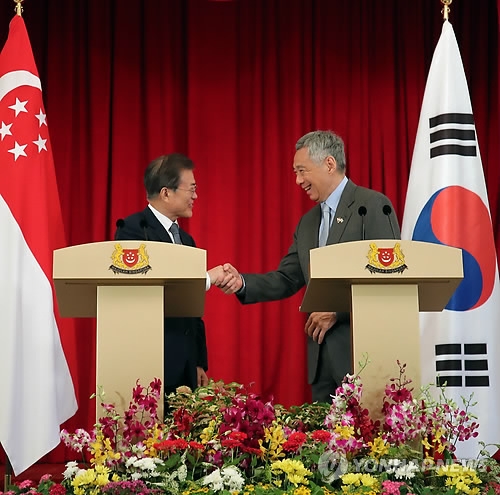 The leaders were later set to attend a signing ceremony for a memorandum of understanding for cooperation on joint development of new technologies and markets in third countries, according to Cheong Wa Dae.

They will later hold an official lunch following a ceremony to name a new breed of orchid after the South Korean president and his wife, Kim Jung-sook, Singapore's traditional way of honoring foreign leaders who visit the Southeast Asian nation, Cheong Wa Dae said.