SEOUL, July 12 (Yonhap) -- A Seoul court on Thursday handed down prison terms of 18 months to 2 1/2 years for two of the closest aides to former President Park Geun-hye and suspended the sentence for another on charges they took illicit funds from the spy agency and delivered them to Park.

Jeong Ho-seong, another ex-presidential secretary, was sentenced to 10 months, suspended for two years.

Prosecutors demanded they be imprisoned for four to five years.

The court ordered Ahn to pay a 27 million-won fine for spending part of the money for personal use.

But the court ruled that the National Intelligence Service (NIS) fund they took cannot be seen as bribes, but a misappropriation of state funds by the NIS provided to the ex-president.

The three were considered so close to Park that they were dubbed in the media the "doorknob trio," a figure of speech implying they were holding the knob of the door leading to Park and that everything had to pass through them to reach her. 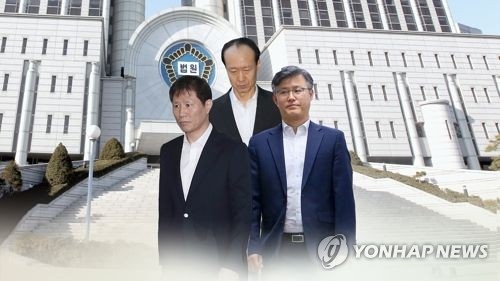