SEOUL, July 15 (Yonhap) -- South Korean companies need to make full use of their prowess in displays and eye-tracking technology to capitalize on future growth in the augmented reality (AR) sector, a state-run science and technology think tank said Sunday.

According to a report by the Korea Institute of S&T Evaluation and Planning (KISTEP) based on data provided by market tracker Digital Capital, the global AR and virtual reality (VR) markets are expected to grow into a US$105 billion business by 2022. It said of the two, AR will be worth $90 billion, roughly six times larger than the projected value of VR.

AR refers to machines providing users with a direct or indirect view of the real world with various elements and surroundings being "augmented" by computer-generated graphics. VR is 100 percent computer-created but seeks to emulate the reality human beings experience on a daily basis.

KISTEP said AR will be big in e-commerce and advertising, with VR likely to be more focused on video games.

It said that while South Korean companies have yet to make a significant splash in these areas like market leaders Oculus and Vive they enjoy some advantages in terms of organic light-emitting diode (OLED) and eye-tracking know-how that is integral to AR and VR.

"South Korean companies are some 1.6 years behind leaders in the U.S. as of 2016 yet they do have strengths that can allow them to grow rapidly, particularly in AR," the think tank said. "At present, there is a pressing need for local companies to develop and market popular AR devices."

KISTEP said that to make advances and catch up to market leaders, concerted research and development efforts need to be made between companies, academia and science and technology institutes. It said the country needs to secure basic technologies and know-how in this field to lead to the production of goods that can generate demand. 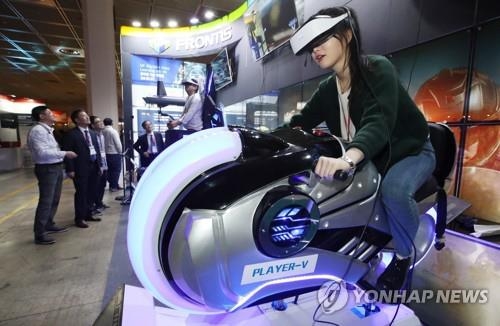 S. Korea must utilize its edge in displays to capitalize on AR growth: KISTEP

S. Korea must utilize its edge in displays to capitalize on AR growth: KISTEP