SEOUL, July 25 (Yonhap) -- The chief of the Swiss delegation at the Neutral Nations Supervisory Commission (NNSC) has voiced support for inter-Korean dialogue to foster peace in front-line waters in the West Sea, long a flashpoint of the divided peninsula.

During a recent interview with Yonhap News Agency, Maj. Gen. Patrick Gauchat also called on the two Koreas to "think out of the box" to build mutual confidence, ease tensions and make headway in their quest for a permanent peace regime.

"It is good that both Koreas start to discuss (peace in the West Sea) because in the last 10 years, the main incidents have been coming from this part of the map," said Gauchat, who has led the Swiss delegation since July last year.

"If they find a solution, maybe this will also help the entire discussion (on other cross-border issues) and confidence-building measures, bringing us to peace," he added. 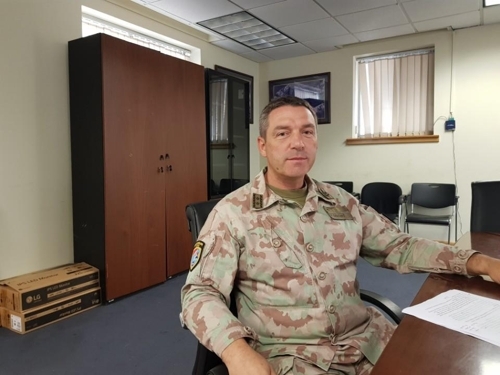 During their April 27 summit at the border truce village of Panmunjom, South Korean President Moon Jae-in and North Korean leader Kim Jong-un agreed to devise a "practical scheme" to turn the areas around the Northern Limit Line (NLL) into a maritime peace zone to prevent accidental clashes and guarantee safe fishing activities.

The NLL has long been a thorn in cross-border ties. The North has denied it, arguing it was drawn unilaterally by the U.S.-led United Nations Command (UNC) after the end of the 1950-53 Korean War. The North wants the line to be redrawn farther south.

Gauchat noted that the Armistice Agreement that halted the Korean War does not mention any West Sea boundary, while stressing the need for a solution to forestall potential conflicts in the waters.

"There is no agreement between the North and South for the NLL. That was a line put by the UNC," he said. "The North proposed a northern line. The two lines are not on the same path. So, they have definitely to discuss. As long as you have two lines, you have a potential of incident."

The NNSC has been the only institution to preserve the Armistice Agreement as an "impartial observer." Despite Pyongyang's repeated denial of the armistice, the NNSC has continued its tasks, such as investigating any incidents within the Demilitarized Zone separating the Koreas.

Due to its unique neutral position, the NNSC can play a role in the process of cross-border peace talks with a measure of confidence from both Koreas, he said.

"Talks on peace have really started this year. And it is important to be able to bring a neutral statement (about) exercises and other incidents, or if there are investigations on incidents ... because we can bring a neutral point of view," he said.

"I will say the further the U.S., South Korea, and North Korea can go into direct talks, the better. But in some agreed point, for example, the withdrawal of some weapons from the front, it is good to have a neutral body available. That can avoid any contentious point to go into a confrontational mode during these direct talks," he added.

Touching on the absence of a peace arrangement to supplant the armistice that was initially meant to be temporary, Gauchat urged "all actors" to strive harder for viable solutions.

"Sixty-five years (since the signing of the armistice) is a big number, and despite lots of efforts, no political peace document could be achieved. That shows that all actors must work even harder to find solutions and to use all opportunities to go towards a peace that would help the populations of both Koreas and the stability of the region as well," he said.

"In that regard, the ongoing dialogue between the North, the South and the U.S. is absolutely positive in our eyes and is the main engine to push towards new ideas and solutions for the Korean Peninsula," he added.

Commenting on the ongoing efforts between Seoul and Pyongyang to reduce border tensions and foster trust, the Swiss official advised the two sides to devise "creative ways."

"This configuration was never directly achieved in the past. So what we have to give is the best conducive condition to allow it to happen. I think there is a willingness between the parties. I think we can be imaginative for confidence-building measures," he added.

As for the "imaginative" ways, Gauchat offered a set of suggestions.

"You can have some units in the DMZ (withdrawn) outside. You can have less weapons in the 10 kilometer zone, 20 km zone, 50 km zone. The number of troops ... You can do a lot. That is conventional," he said.

"You can also do joint patrol to visit those places. If you see an empty place, then you have to verify. Then you have to verify again after three months or six months. Joint patrolling for example is also a good confidence-building measure because people will work together and start to say oh we are the same, we all cook with water," he added.

During his decadeslong military career, Gauchat served in various high-profile positions, including U.N. peacekeeping responsibilities in Congo, Somalia and the Middle East, and a stint as senior officer in charge of the Middle East and Asia at the U.N. Headquarters in New York.