SEOUL, July 27 (Yonhap) -- South Korea will reduce the number of general-grade officers by about 17 percent over the next four years, in line with the overall troop drawdown scheme, as part of a new defense reform initiative aimed at creating a slimmer yet stronger military.

The initiative also calls for launching the Ground Operation Command by merging the First and Third Army commands, an integration based on technological advancements that have reduced operational redundancies and allowed greater efficiency.

The military will retain an aggressive program to counter North Korea's nuclear and missile threats, contrary to speculation that it will be diluted amid Seoul's push for inter-Korean reconciliation and North Korea's denuclearization.

Following its briefing to President Moon Jae-in, the defense ministry announced the Defense Reform 2.0. blueprint that was forged in light of "uncertainties" in the peninsula's security landscape, regional arms competition, and evolving transnational and nonmilitary threats.

"Our military has established Defense Reform 2.0. based on the recognition that reform is an order from the people that can no longer be delayed, in light of the transitional security situation that we have never experienced before, and social changes, such as the demographic change and the fourth industrial revolution," the ministry said in a press release.

"It is a set of special measures to realize a strong military and responsible defense that can buttress a peaceful and strong Republic of Korea in the security situation of a transitional period and amid constraints in policy formulation," it added.

According to the blueprint, the number of general-grade officers will be reduced from the current 436 to 360 by 2022 when Moon's five-year term ends. This means the removal of 66 general-level positions for the Army and five each for the Navy and Air Force.

The reduction, if completed, will be a return to the level of the mid 1970s when the country was pushing for military modernization following the withdrawal of its troops from the 1960-75 Vietnam War.

Despite earlier reduction proposals to streamline the bloated top command apparatus, those proposals floundered due in part to resistance from the top brass.

The cut will come in sync with plans to pare down the number of active-duty troops to 500,000 by 2022 from the current 618,000, and increase the proportion of the civilian staff in the defense establishment to 10 percent from the current 5 percent.

The reform initiative also includes a measure to shorten the length of mandatory military service for Army draftees to 18 months from the current 21 months by 2022. The measure is expected to start being phased in later this year.

The overall troop drawdown is part of efforts to overcome the country's demographic changes, triggered by the low birthrate, and bring in more civilian workers for noncombat military positions to enhance job efficiency and consistency.

The Ground Operation Command is set to be launched on Jan. 1 next year. It will undertake a range of missions, including shielding the Seoul metropolitan area from threats from the North's long-range artillery positioned along the border.

The blueprint also includes a decision to consider having the chairman of the Joint Chiefs of Staff (JSC) double as the commander of the South Korea-U.S. Combined Forces Command after the envisioned transfer of wartime operational control (OPCON).

The allies have been pushing for a "conditions-based" OPCON handover, which would enable a South Korean commander to take the lead in wartime operations with a U.S. deputy commander playing a supporting role.

In an effort to enhance inter-service cooperation, the reform plan calls for ensuring that the Army, the Navy and Air Force equally share core decision-making positions at the JCS and key units attached to the defense ministry.

The reform blueprint also reaffirmed that Seoul will press ahead with a plan to establish the "three-axis" system that consists of the Korea Massive Punishment and Retaliation, an operational plan to incapacitate the North Korean leadership in a major conflict, the Kill Chain pre-emptive strike platform, and the Korea Air and Missile Defense system.

Amid ongoing peace efforts, speculation persisted that Seoul might revise -- or tone down -- the plan to make it appear less hostile to the North. The plan was devised at the height of cross-border tensions triggered by the North's nuclear and missile tests.

As part of a unit realignment, the Air Force plans to create a new reconnaissance wing to strengthen its capabilities for long-distance and space operations. The Navy will expand its maritime task flotilla and aviation wing to secure capabilities for surface, underwater and aerial operations. 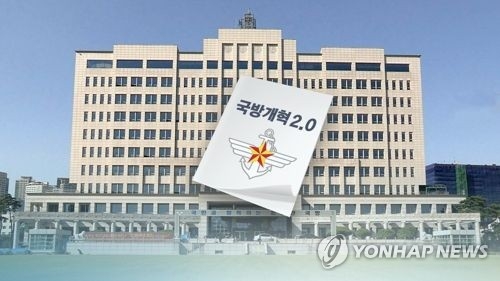