SEOUL, July 29 (Yonhap) -- Hyundai Motor Co. said Sunday that it sold 223 Nexo hydrogen fuel cell cars since its launch in March, and that the company expects record sales for its clean car this year, buoyed by increases in domestic and worldwide demand.

South Korea's No. 1 carmaker said of the total, 179 of its fuel cell electric vehicles (FCEVs) were sold in the home market, with 44 being shipped abroad, up till last month.

It said that while the overall volume is not high, it is close to the 269 Tucson FCEVs sold for the whole of 2015. The Tuscon crossover, unveiled in 2013, was Hyundai's first production hydrogen fuel cell car made in any numbers. 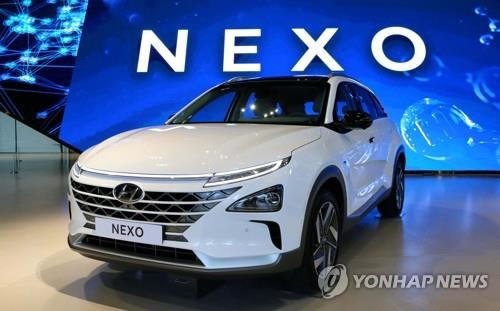 FCEV is a type of car that uses stored hydrogen and a fuel cell to produce electricity that powers its on-board electric motor to push it forward. It is viewed as being a clean car with water the only byproduct of this system.

"At the present pace, Nexo sales could top 500 by year's end, especially as the SUV will reach the U.S. market in the third quarter," a Hyundai insider said, adding the carmaker has high hopes for solid demand in places like California that have strict emission rules.

The source said in South Korea, monthly sales have stood at an average 45 units, with numbers on the waiting list ballooning to 1,700 vehicles at present.

He said, however, limits on state subsidies set aside for this year may hold up sales.

Hyundai said the Nexo has been rated to travel 609 kilometers on a full tanks of hydrogen and is capable of cleaning the air because it uses advanced purifiers.

The South Korean government, meanwhile, said that it aims to help supply 15,000 FCEVs by June 2022 and is moving to allocate more resources and to build up critical hydrogen charging infrastructure.

At present, South Korea only has 16 hydrogen charging stations in total, with ordinary drivers having access to just eight.
(END)