SEOUL/DAEJEON, Aug. 1 (Yonhap) -- In the annals of Korean sports, the year 2018 will go down as one highlighted by an unprecedented level of inter-Korean sports exchanges.

But the Koreas also face a few questions concerning the sustainability of their sports cooperation. Where do they go from here? What needs to be done to ensure they'll continue to field competitive teams while they can?

Athletes and coaches who have been or will be part of the unified teams say the Koreas must go above and beyond just putting athletes on the same roster just before competitions. They could all benefit from more time for preparations.

It can really be that simple. 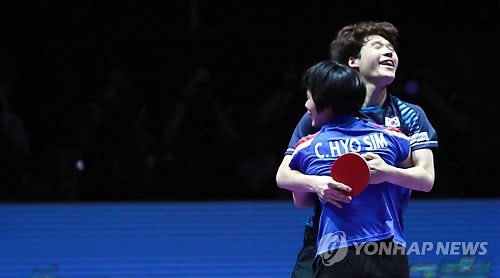 Or to put it differently: Unifying two Korean teams shouldn't just be for show; there has to be more substance.

In the first seven months of 2018 alone, the Koreas have teamed up at three international competitions, with another one on the horizon.

The very first of those teams, the women's hockey squad at the PyeongChang Winter Olympics in February, has also been the most controversial one, because of the hasty fashion in which the South Korean government pushed through with the project. Once the International Olympic Committee (IOC) gave the green light, 12 North Korean players joined 23 South Koreans only two weeks before the opening ceremony -- simply not enough time for strangers to get on the same page in such an intricate team sport as hockey.

After the Olympics, the unified team, despite losing all five games, was hailed as a symbol of peace. But rather than focusing on what they'd done off the ice, South Korean players expressed frustrations that they simply didn't have enough time to prepare for what they were supposed to do on the ice. They said if the Koreas were to assemble another joint team in their sport, they should have about three to four years to work things out in advance.

Mindful of this view, as well as criticism it faced for its rush job, the government began the process for joint teams at the Aug. 18-Sept. 2 Asian Games months ahead of time. Such efforts picked up pace in late April, when South Korean President Moon Jae-in and North Korean leader Kim Jong-un, following their summit, announced their hopes for joint teams at the Asian competition, which will take place in Jakarta and Palembang, Indonesia. 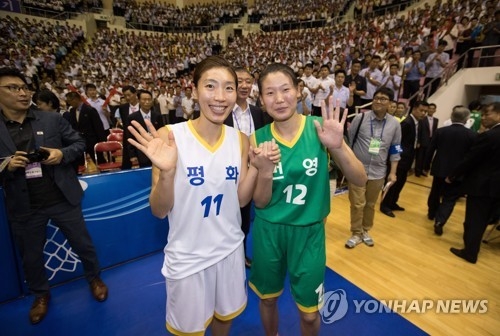 The Korea Canoe Federation (KCF) began preparing for a unified Korean team in the Asian Games dragon boat racing in April. Several other national sports federations expressed interest in competing together with North Korea. The final decision to have the Koreas as one in basketball, canoe and rowing at the Asian Games was reached in late June, nearly two months before the start of the competition.

And in between, the Koreas also competed together in table tennis on two different occasions, the latter of which took place in South Korea in July. But at both competitions, the decisions to unify the teams were reached at the last minute.

At the World Team Table Tennis Championships in Sweden in May, the South and North Korean women's teams were brought together before they were scheduled to play each other in the quarterfinals. They played in the semifinals as one Korea and took the bronze medal after losing to Japan. The team matches only consisted of the singles, meaning the Korean players didn't have to play together as partners and only had to represent the same Korean Unification Flag.

But ping pong players did get to compete on the same teams in the doubles at the International Table Tennis Federation (ITTF) World Tour Platinum Korea Open, which ran from July 17-22 in Daejeon, 160 kilometers south of Seoul. The decision to field four pan-Korean doubles teams -- two in mixed doubles and one each in the men's and women's doubles -- was reached just two days before the start of the event. The players had their first practice together on the eve of the tournament. 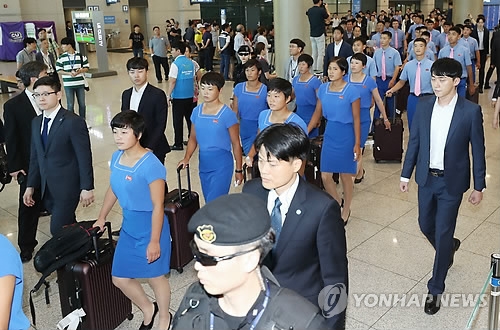 While the athletes were putting on a happy face and saying all the right things, there was some hand-wringing from national team and club coaches.

"If we combine our teams, the players can certainly enjoy great synergy, but if things are done at the last minute like this, nothing can be accomplished," Yoo said on July 16, on the eve of the Korea Open. "These players have just a couple of days to practice together."

Yoo spoke from experience, as he witnessed first-hand how extensive time together did wonders for the unified team at the 1991 World Table Tennis Championships in Chiba, Japan. While Yoo's men's team lost in the quarterfinals, the women's Korean team stunned China, then an eight-time defending champion, to capture gold.

"How do you think the unified team did so well back then? We trained together for 46 days," Yoo noted.

One other mixed doubles team, Choe Il (North) and Yoo Eun-chong (South), got knocked out in the round of 16.

After her team's elimination, Yoo gushed about what a great partner Choe had been, even in those few days that they were together, and said she wished she'd had more time together.

"It would have been better if we'd been able to work together longer," she said. "We certainly could have used more time to get to know each other more and figure out our strengths and weaknesses." 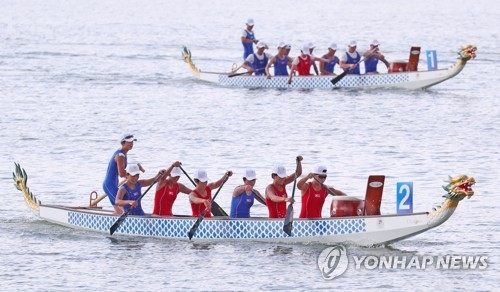 "This shouldn't just be a one-time thing," Kim said. "Even when we're not competing in tournaments, we could cross the border to train with them, and they can come down here to train with us."

Hyun Jung-hwa, who played on that women's team 27 years ago, offered that the two Koreas should take a long view toward the 2020 world championships, which will be hosted by the South Korean city of Busan.

During the Korea Open, ITTF President Thomas Weikert said the global governing body had "long-term plans" for the unified Korean team, with an eye on bringing the two together again at the 2020 worlds.

"I hope we can start expanding our table tennis exchange right away," Hyun said. "We could hold home-and-away matches in Seoul and Pyongyang, and spend more time training together. This will help increase interest in table tennis and help the 2002 world championships as well."

Ryu Seung-min, the 2004 Olympic men's singles champion and an IOC member, said the two Koreas and the ITTF all understand the importance of extending the legacy of pan-Korean efforts in table tennis.

"We all agreed that fielding joint Korean teams shouldn't be a temporary show," Ryu said. "We believe that both Koreas should try to improve through continued exchanges."

An official with the Korea Table Tennis Association (KTTA) said the South Korean body will seek to invite North Korean players well ahead of next year's Korea Open, so that players on unified Korean doubles teams will have extra time to prepare but added, "Nothing specific is set in stone."

Time is at a premium for women's basketball at the Asian Games too. Three North Korean players to join nine South Koreans -- center Ro Suk-yong, guard Jang Mi-gyong and guard Kim Hye-yon -- were on July 17, about a month before the Asian Games. But they only arrived in South Korea last Sunday and didn't even get to train with the South Koreans right away. South Korea was in Taiwan for a tournament and returned home Monday. They were scheduled to resume training later Wednesday, 17 days before the opening of the Asian Games.

At least these players are a bit familiar with one another already, as they played with and against each other in two friendly games in Pyongyang in early July. But playing in feel-good games with nothing at stake is one thing, while competing on the same team with a gold medal on the line -- South Korea is the defending Asiad champion in women's basketball -- is quite another. 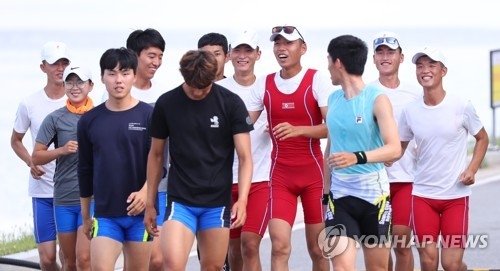 Basketball players engage in constant communication with one another on the floor during a typical game. And the reason that the Korean players could use more time to train together isn't so much physical or technical. They just need to figure out how to understand each other better because they're used to different sets of basketball lingo.

During the PyeongChang Olympics, the South Korean coaching staff in women's hockey compiled a dictionary-like list of English hockey lingo with the Korean definition next to each word. The women's hoops team could use one too. South Koreans are accustomed to English terms for words like shooting, passing, rebounding, blocks and screens, but North Koreans are used to their own vocabulary. There will be moments when North Koreans will need some interpretation help when South Korean coaches draw up plays.

South Korean captain Lim Yung-hui said while she and her teammates have a better understanding of North Korean players after their friendlies, communication presents a whole different challenge.

"When we played in Pyongyang, there were a few things they said that we didn't understand, and they didn't get some things that we said," Lim said. "In basketball, communication between teammates is crucial. We'll need to facilitate our on-court communication, but I don't think we'll have enough time for that."

Assistant coach Ha Sook-rye, though, chose to look on the bright side, saying the North Korean players will bring plenty of skills to the table.

"I think our teams have been combined with a big picture in mind, so that both programs could improve," Ha said. "I saw a few skilled North Korean players (in Pyongyang). If we can build a strong chemistry, we should enjoy some good results."

It's never an ideal situation to ask athletes to play together with people that they've never previously met -- let alone competed with -- and do so at the last minute. If South Korean athletes are just forced into playing with North Koreans, the risk is that it may reduce competitions into mere political or diplomatic spectacles. The argument that this can still achieve the always-difficult-to-define "greater good" may well fall flat.

At the end of the day, peace or politics aside, athletes will want to win. The least the government and other officials involved can do is to put them in a position where they can accomplish just that -- and also give them time to make it work.