SEOUL, Aug. 1 (Yonhap) -- Two television series on SBS made a strong debut on the weekly TV chart, ranking second and third on their first week of broadcasting, data showed Wednesday.

For their latest episodes, they garnered viewership ratings of 7.7 percent and 8.8 percent, respectively, promising good numbers for television series on territorial networks, which have been underperforming their cable channel competitors. 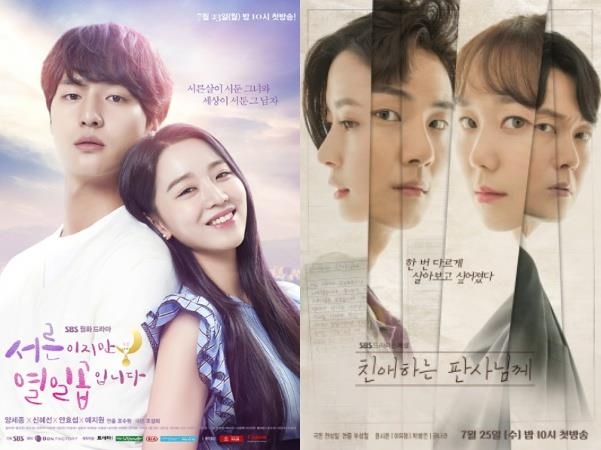 The legal drama "Your Honor," starring Yoon Shi-yoon and Lee Yoo-young, revolves around a man who stands in for his identical elder brother and acts as a judge after his smarter sibling has gone missing.

Featuring young rising stars Yang Se-jong and Shin Hye-sun, the romance series "Still 17" tells a story of a woman who wakes up from a 13-year coma to find that she is already 30 years old. With the mental age of a 17-year-old, she becomes confused as she gets involved with a man who is afraid of starting a relationship with others due to a traumatic experience 13 years ago.

The project is aimed at auditioning talented performers from South Korea and Japan to put together a girl group through audience voting. The show premiered June 15 on Mnet and Japan's BS Scapa simultaneously.

The program, first unveiled in "2017 MAMA in Japan" in November, is a collaboration between Mnet's popular audition program "Produce 101" and Yasushi Akimoto, who produced AKB48.