SEJONG, Aug. 1 (Yonhap) -- South Korea's production capacity in the manufacturing sector fell at the steepest rate ever in the second quarter, statistics showed Wednesday, a sign that could be interpreted as either more efficient use of equipment or a slowdown in investment.

The production capacity index for the quarter was down 1.1 percent from the same period last year, according to Statistics Korea. It is the biggest quarterly fall since the agency began keeping track in 1971.

The index had risen every quarter until the fourth quarter last year when it retreated 0.1 percent for the first negative growth. It has been falling ever since. The number measures maximum production capacity when personnel, equipment and workhours are operated in full.

Falls in transportation equipment and metalworking were especially stark, apparently from restructuring in the shipbuilding industry.

For the transportation equipment sector, the index has been sliding 7 to 8 percent from 2015. The fall quickened to 11.7 percent in the first quarter this year and to 14.6 percent in the second quarter. 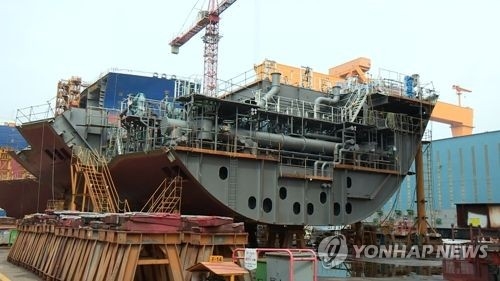 Production capacity in semiconductors used to maintain a 20 percentile increase up until the first half of last year, but the growth rate shrank to the 1-2 percent range recently from adjustments in facility investments.

The capacity for automobiles dropped 4 percent in the second quarter this year, the largest decline since 1980.

Economic watchers say the decrease in the index could mean increased efficiency as industries get rid of unneeded, excess equipment and facilities. They cite as proof the improved average production operational rate to 73.3 percent in the second quarter from the previous 71 percent.

Naysayers, however, say it has more to do with sluggish investment from a protracted slump in domestic consumption.

Production capacity in manufacturing falls at steepest rate in Q2

Production capacity in manufacturing falls at steepest rate in Q2