SEJONG, Aug. 1 (Yonhap) -- The size of land approved for residential construction in the first half of this year shrank by 17 percent compared to the same period last year, data showed Wednesday.

According to the Ministry of Land, Infrastructure and Transport, the government approved 28.4 million square meters of land for building residences such as apartments and private homes. This is 17.2 percent less than the first half of last year, likely reflecting the recent contraction in the housing market as the government enforced policies to root out real estate speculation and price hikes.

The size for completed housing construction, which usually shows how much home building was approved two to three years ago, rose 20.6 percent to 32.38 million square meters, the ministry's data showed.

The area of apartments at completed construction sites increased 44 percent to 24.56 million square meters, comparable to a 21.4 percent decrease in construction approval for the first half of this year.

Construction permits for apartments fell the biggest for Seoul, down 58.4 percent in terms of area. For Incheon, a port city near the country's western coast, the permit area increased 51.9 percent. 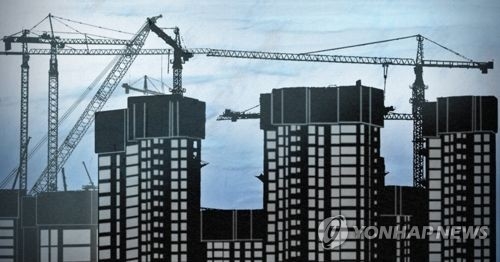