SEOUL, Aug. 1 (Yonhap) -- Baseballs are leaving the yard at a record pace in the top South Korean league through July, with a pair of second-year foreign bats enjoying a power surge.

There were 10 homers hit on the final day of July in five games in the Korea Baseball Organization (KBO). Through 506 games, 1,179 balls have gone out of parks across the league, compared with 1,065 homers through 507 games a year ago. 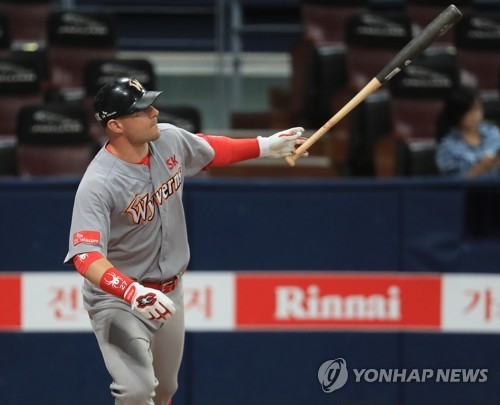 At this point a year ago, five of the 10 clubs had reached the century mark in home runs. But now, there are seven such clubs.

The KT Wiz, after hitting just 119 homers in 2017, already have 142 this year to rank second behind the SK Wyverns.

And it's the foreign sluggers that have been carrying the big sticks for both clubs.

Jamie Romak of the Wyverns is leading the KBO with 34 home runs in 96 games, two ahead of the Doosan Bears' Kim Jae-hwan and three more than injured SK slugger Choi Jeong. Romak is trying to become the first foreign player since Larry Sutton in 2005 to win the home run title outright.

In 2016, Eric Thames, currently a Milwaukee Brewer who played for the NC Dinos here, tied Choi for the KBO lead with 40 home runs.

Romak put on an impressive power display last year after arriving as a midseason acquisition, belting out 31 home runs in just 102 games. But he batted only .242 while striking out 116 times. 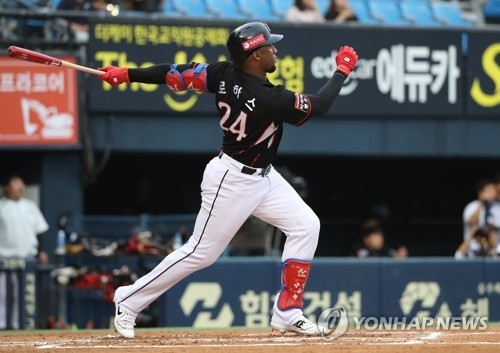 This year, Romak is batting .329 and has cut down on his strikeout rate per plate appearance, from 27.9 percent to 22.3 percent.

For the Wiz, second-year outfielder Mel Rojas Jr. has increased his home run total from 18 in 83 games last year to 28 in 100 games this year.

Rojas, too, is striking out less than last year while hitting for a higher average and slugging at a higher rate.

In the homegrown contingent, Nexen Heroes slugger Park Byung-ho has resumed his homer-hitting ways in recent weeks after a slow start following a return from a stint with the Minnesota Twins.

Park, the KBO home run king from 2012 to 2015 and the only player in league history to hit 50 or more in consecutive seasons, is fifth this year with 26 homers. He's missed 30 games this year with injuries and had just nine long balls through May. But he's gone deep 17 times over the past two months, and he has proven capable of hammering a bunch of them in short spurts.

Two other returnees from Major League Baseball, Kim Hyun-soo of the LG Twins and Hwang Jae-gyun of the Wiz, are also closing in on a 20-homer season. Kim, whose career high is 28 from 2015, has 18 this year. Hwang, who had 27 in 2016 for his personal best, is sitting at 15. 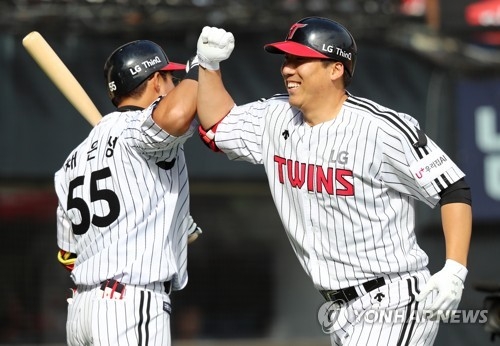