SEOUL, Aug. 1 (Yonhap) -- This year's Lindenbaum Music Festival will bring together the Yale Symphony Orchestra and young classical musicians from South Korea and around the world to perform symphonies near the heavily fortified border with North Korea in hopes of inter-Korean peace, its organizer said Wednesday.

Launched in 2009 as an annual classical music festival in South Korea to promote the message of peace and harmony through music, the Lindenbaum Music Festival will open its 9th event on Aug. 6 for a seven-day run, according to the organizer.

The festival features three main classical music concerts, starting with a recital by pianist Eva Virsik on Aug. 7 and a chamber concert led by Tunisian violinist Yasmine Azaiez on Aug. 10, both to be held at the Tri-Bowl conference hall in Incheon, west of Seoul.

The final leg of the festival on Aug. 12 will be a peace concert near the Demilitarized Zone (DMZ), a strip of no man's land that separates the two Koreas.

Under the baton of conductor Toshiyuki Shimada, the music director of the Yale Symphony Orchestra of Yale University, the concert will perform three music pieces symbolizing peace at what was previously Camp Greaves. The former American military base, located some 2 kilometers south of the DMZ, now serves as a tourist spot.

The concert will bring together key members from the Yale Symphony Orchestra as well as musicians from home and abroad to perform "Candide," a 1956 work by American composer Leonard Bernstein, as well as "Fence-a-Dance," a 2018 song by Tod Machover, currently professor of music and media at the Massachusetts Institute of Technology's Media Lab, and Antonin Dvorak's symphony "From the New World."

"The events that are taking place on the Korean Peninsula are very surprising," the organizer quoted Machover as saying. He also expressed hopes to "lay the groundwork for peace through the music" to be played in the upcoming festival.

Since its inception, Lindenbaum has attempted to form a joint inter-Korean orchestra with North Korean members for its festivals, but it has been unsuccessful because of diplomatic and military tensions with North Korea so far.

For its 2015 festival, the organizer pushed to stage a joint concert with North Korean musicians at the Joint Security Area located between the two Koreas, but the plan also came apart following the North's detonation of land mines at the border area that year, which maimed South Korean soldiers. 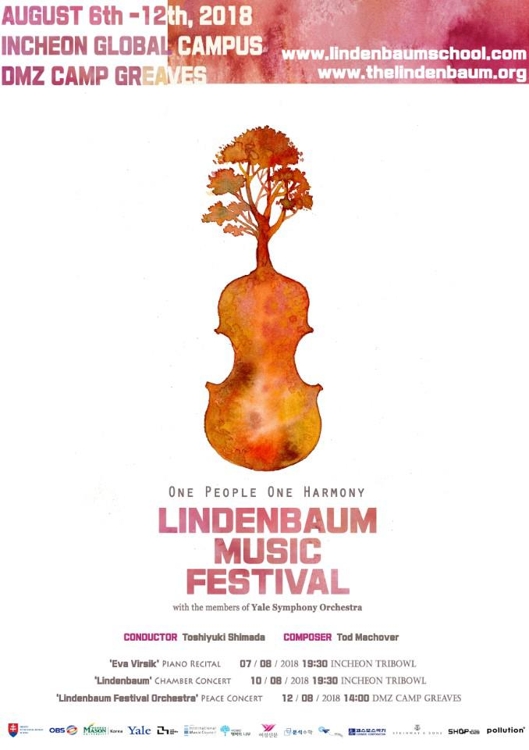 Lindenbaum festival to perform symphonies of peace near DMZ next week

Lindenbaum festival to perform symphonies of peace near DMZ next week