Oh Chang-seok, a former men's national marathon coach who now acts as an agent for Erupe, said the 29-year-old athlete was granted citizenship by the justice ministry on Tuesday.

He failed in his previous bid in April 2016. But he has been competing for a South Korean municipal government since June 2015.

According to Oh, Erupe will adopt a Korean name, Oh Joo-han, which translates into "I run for Korea." 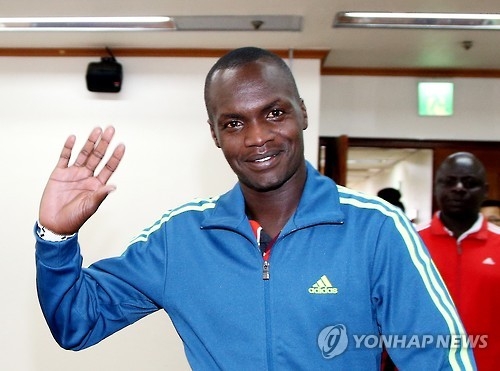 Erupe once hoped to represent South Korea at the 2016 Summer Olympics.

Oh Chang-seok believes Erupe can fight for a spot on the podium at the 2020 Tokyo Olympics, but recent rules by the International Association of Athletics Federations (IAAF) on transfer of allegiance will make Erupe ineligible.

Under the rules adopted last week at an IAAF council meeting with immediate effect, athletes must wait three years after switching allegiance before representing their adopted country.

Erupe will make his first appearance as a South Korean citizen at the Gyeongju International Marathon in Gyeongju, some 370 kilometers southeast of Seoul, on Oct. 21.

Erupe's pursuit of a South Korean passport once divided the local athletics community. Some said he could provide a much-needed shot in the arm for South Korean marathon running, which has stagnated for years. No South Korean has made it under the 2:10:00 mark since Jeong Jin-hyeok's 2:09:28 in 2011.

On the other hand, critics said they'd rather see homegrown runners, not foreign-born athletes, revive the once-proud marathon tradition.