JEJU ISLAND, South Korea, Aug. 1 (Yonhap) -- The body of a woman who went missing last week while camping out on the southern resort island of Jeju was found Wednesday, police said.

A commercial passenger ship made the discovery in waters about 1.5 kilometers west of the Gapado islet, just southwest of Jeju, at about 10:50 a.m. and reported it to the Coast Guard.

The body was retrieved at 11:08 a.m. and transported to a hospital morgue, the Jeju Metropolitan Police Agency said.

The woman, only identified by her last name Choi, disappeared just before the midnight on July 25 at a port where she had been staying with her family on an extended trip.

Police were unable to immediately make an identification of the body due to severe decomposition. But the tattoo and necklace were a match to the victim's, they said.

The body will be sent to a forensic lab for an autopsy and further examination to determine the exact cause of death.

The location where the body was found suggests her body traveled halfway around the island because it was discovered on the other end of the seashore.

The 38-year-old had been camping with her husband and two children since mid-June and was out on her own that night to get more alcohol and other food from a convenience store before she disappeared.

Her husband, 37, has told police he woke up just after midnight to realize she hadn't come back and began to look for her. Choi's phone records showed she made a couple of phone calls to her husband and sister before the time she went missing.

Police said they are investigating her death based on all possibilities and are not ruling out homicide. 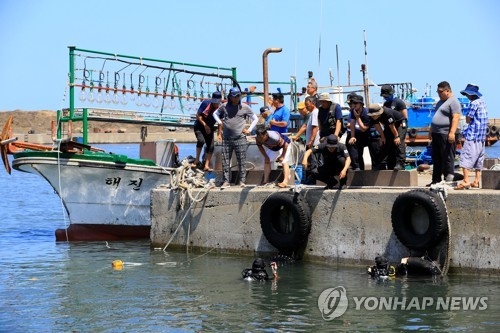 Body of missing woman on Jeju found in sea: police

Body of missing woman on Jeju found in sea: police