The Korea Basketball Association (KBA) said Wednesday that Park, a rookie center for the Las Vegas Aces, is one of nine South Koreans joined by three North Koreans for the Aug. 18-Sept. 2 Asian Games in Jakarta and Palembang, Indonesia.

But a KBA official said it's not yet clear if the 19-year-old will be allowed to play. The KBA is still in talks with the Aces over Park's release during the WNBA season, and the KBA is prepared to name a replacement in case Park isn't made available. 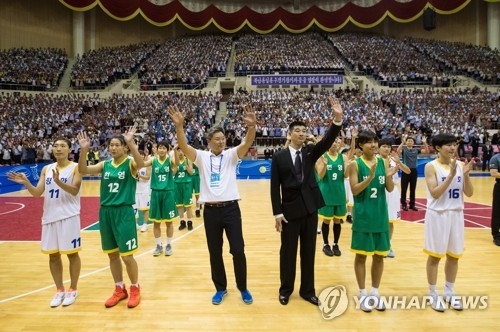 In 25 games for the Aces, Park is averaging 3.2 points and 3.6 rebounds per game. She is shooting 42.5 percent from the floor while averaging 13.5 minutes of action.

The South Korean head coach is Lee Moon-kyu. The three North Korean players crossed the border last Sunday with their assistant coach Jong Song-sim, rather than their own head coach Jang Myong-jin.

South Korea is the defending Asian Games champion. In this year's Asian Games, the unified Korean team has been paired with Taiwan, Indonesia, Kazakhstan and India in Group X. The top four teams out of that group will reach the quarterfinals.

The unified team held its first joint practice at Jincheon Training Center in Jincheon, 90 kilometers south of Seoul, on Wednesday.