The war of words further intensified after the floor leader of the main opposition Liberty Korea Party (LKP) claimed Tuesday that the Defense Security Command (DSC) had also devised a similar plan in 2004, when former liberal President Roh Moo-hyun was impeached.

In March 2004, Roh was impeached by parliament on charges that included illegal electioneering, but he was reinstated by the top court about two months later.

The controversy was sparked as a civic group disclosed DSC documents last month that showed the unit had set up detailed plans for declaring martial law last year to curb civilians' candlelight protests against then corruption-ridden President Park Geun-hye, who was impeached by parliament.

The group also claimed Monday that the DSC allegedly wiretapped phone conversations between Roh and his defense minister more than a decade ago and carried out illegal surveillance on millions of civilians.

The LKP raised doubts about how the Center for Military Human Rights Korea could secure such classified documents.

Kim Sung-tae, the floor leader of the LKP, even said Tuesday that it is absurd that military reforms are being moved by a civic group, whose chief is struggling with his sexual identity.

"The floor leader of the largest opposition party is misleading public sentiment. It is questionable that the LKP is trying to defend the DSC," said Baek Hye-ryun, a spokeswoman at the party.

The ruling party regarded DSC documents as evidence for a de facto coup. But the LKP, which was the ruling party under Park's government, claimed that they might have been just drawn up to prepare for emergency situations, not for rebellion.

"The DSC documents were kind of the risk management manual, not documents over an attempted rebellion or coup," said Kim Byong-joon, the LKP's interim leader. 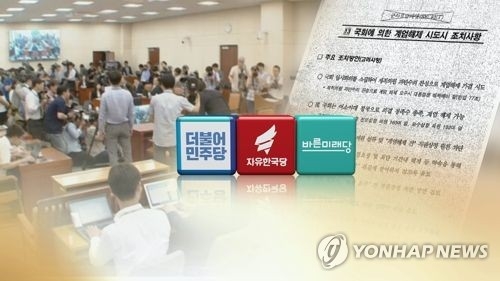