Like in previous years, Pyongyang is sending its top diplomat, Ri Yong-ho, to the session to be held in Singapore this weekend.

He's expected to arrive here on Friday morning from Beijing.

During last year's meeting in Manila, Ri faced criticism for the North's continued provocations, including various missile launches. That is not likely to be the case this time.

He will instead be emboldened by a peace mood, as his country has taken several goodwill measures, such as the dismantling of nuclear and missile testing sites and the repatriation of American war dead.

Participating in the ARF session at the Singapore Expo convention center on Saturday, Ri will be in the same room with his South Korean, American, Chinese and Japanese counterparts along with foreign ministers of two dozen other nations. 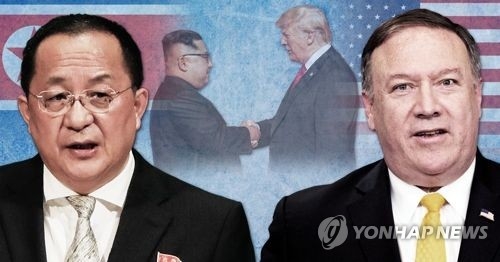 He may hold formal talks with U.S. Secretary of State Mike Pompeo.

"We will be in some of the same meetings as North Korean government officials," the department's spokeswoman Heather Nauert told reporters in Washington D.C. "I certainly can't preclude any interaction taking place, but we have no meetings on the schedule. Nothing is planned."

The South's Foreign Minister, Kang Kyung-wha, has already proposed a bilateral meeting with Ri. She's waiting for the North's response.

In Manila last year, Ri refused to meet bilaterally with Kang.
Ri is likely to sit down together with Chinese Foreign Minister Wang Yi in a show of the close relations between the two sides. Japanese media raised the possibility of Ri holding talks with Foreign Minister Taro Kono as well.

Ri could receive invitations for bilateral talks from some Southeast Asian nations that have traditionally supported Korea peace efforts.

Any remarks by Ri on denuclearization and an envisioned peace regime, including a push for the declaration of an end to the Korean War, will certainly draw keen attention here.