SEOUL, Aug. 1 (Yonhap) -- South Korea's chief economic policymaker said Wednesday that the government is reviewing a set of additional tax incentives for small shop owners to reduce their cost burden stemming from a hike in the country's legal minimum wage.

"The government will do more (offering tax incentives) if there are things to be done," Finance Minister Kim Dong-yeon said in a meeting with a group of small shop owners.

Earlier this week, the government unveiled an array of tax cuts for smaller firms, as well as neighborhood stores.

Kim said he will carefully consider the business community's request that the Minimum Wage Commission should again deliberate its recent decision to raise the minimum hourly wage 10.9 percent to 8,350 won (US$7.40) for 2019.

The commission -- composed of representatives of labor, management and the government -- made the decision last month, sparking concerns from local businesses, especially small and medium-sized firms, that the hike could hurt small companies, such as mom and pop stores, and thereby slow down the entire economy. 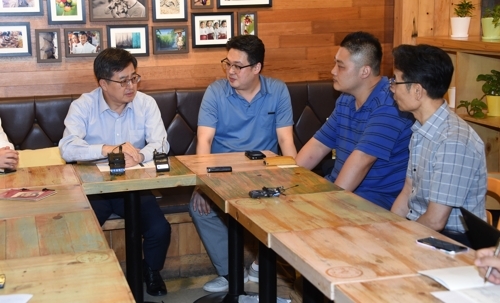