SEOUL, Aug. 1 (Yonhap) -- The executive head of South Korea's largest Buddhist order committed Wednesday to step down this month in the face of growing corruption allegations and ensuing calls for his resignation by rank and file members of the sect.

Ven. Seoljeong, the executive chief of the Jogye Order of Korean Buddhism, told the council of the heads of Buddhist temples that he will resign from his post before the sect's central meeting set for Aug. 16, according to the council.

Calls have been growing for the 76-year-old monk to step aside over a string of allegations that he forged his academic credentials, illegally owned a vast amount of real estate and secretly fathered a daughter against the sect's celibacy rule.

The allegations led many rank and file members of the Jogye Order and civic groups to stage protests demanding Seoljeong's resignation.

A reform-minded senior Buddhist monk, Seoljo, was taken to a hospital on Monday after a 41-day hunger strike staged next to the order's headquarters in central Seoul in protest.

It marks Seoljeong's departure from the top executive post of the Jogye Order less than one year after he took office in November last year for a four-year term. 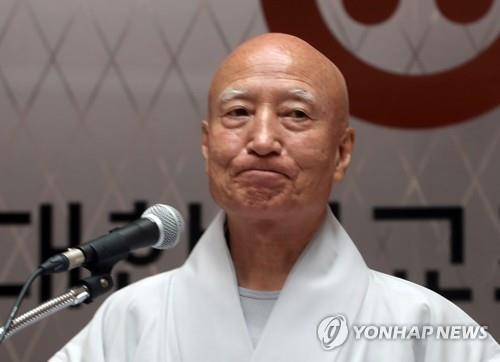