Pence stopped in California en route to Joint Base Pearl Harbor-Hickam, Hawaii, where a ceremony will be held 2 p.m. Wednesday (local time) following the repatriation of 55 sets of remains from North Korea last week.

"As we travel to @JointBasePHH, Karen & I are honored to be joined by Diana Brown Sanfilippo & her husband Robert," Pence tweeted early Wednesday. "Diana lost her father in the Korean War during a recon mission. We're also honored to have Rick Downes, whose father was lost while operating radar on a B-26 bomber."

Reporting from Hawaii, Fox News host Pete Hegseth, who traveled with Pence on Air Force 2, said Sanfilippo and Downes were three or four years old when their fathers were sent to fight in the Korean War.

The men were both pilots and both first lieutenants. 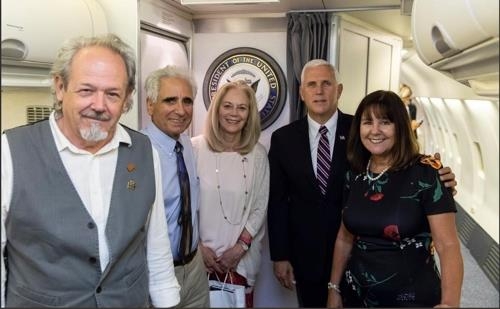 "They recalled to me and recalled in media reports that last hug and that last kiss to their father before they went to that war and ultimately never came home, both shot down, remains never found," Hegseth said. "They dedicated their lives for the last 60 years finding out what happened to their fathers."

North Korea delivered the remains last week as part of an agreement reached by its leader Kim Jong-un and U.S. President Donald Trump at their historic summit in Singapore in June.

On Friday a U.S. military aircraft transported the remains out of North Korea to Osan Air Base in Pyeongtaek, 70 kilometers south of Seoul. And following a ceremony at the base earlier Wednesday, the remains were flown to Hawaii for forensic identification.

The U.S. estimates that the remains of some 5,300 American soldiers have yet to be recovered from North Korea.