She plans to hold back-to-back talks with her Chinese, Japanese and Russian counterparts in the afternoon, all of whom plan to attend the ASEAN Regional Forum (ARF) slated for Saturday.

High on the agenda, as usual, is North Korea. The focus is on ways to move the denuclearization of Korea forward and achieve a peace regime. 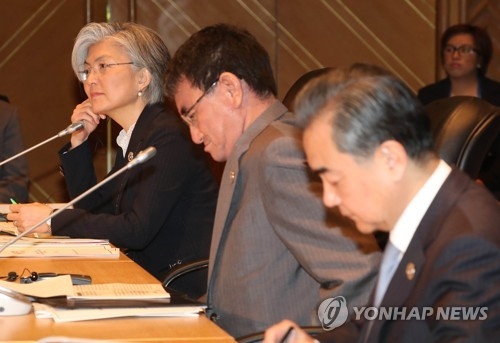 Meeting with Myanmar's Minister for International Cooperation Kyaw Tin in Singapore on Wednesday, Kang pointed out that denuclearization is a "complicated process" in spite of high expectations spurred by the recent peace mood, according to her aides.

She stressed a peace system for security assurances that the North wants will be discussed in tandem with denuclearization.

Pyongyang and Washington agreed to seek the "complete denuclearization" of the peninsula in return for peace-building measures during their Singapore summit on June 12. But they have sparred with each other over the sequence of concrete steps.

Drawing support from China, Japan and Russia is crucial in the peace process initiated by the Moon Jae-in administration.

Few would deny that China's constructive role, in particular, is indispensable.

It's the North's last-remaining communist ally and largest benefactor. It's also a signatory to the Armistice Agreement that effectively ended the Korean War.

China has stated that it would participate actively in efforts to bring lasting peace to Korea, but it has been rather vague on Koreas' push for the declaration of a formal end to the 1950-53 conflict.

In his unannounced visit to South Korea earlier this month, Yang Jiechi, a top Chinese communist party official in charge of foreign affairs, apparently talked about the issue with senior South Korean officials.

The issue will likely be raised in Kang's meeting with Chinese Foreign Minister Wang Yi here.

On the basis of her consultations with the top diplomats of the regional powers, Kang will hold bilateral talks with U.S. Secretary of State Mike Pompeo on Saturday.