(ATTN: UPDATES throughout with talks with Russia, Japan; ADDS photos) 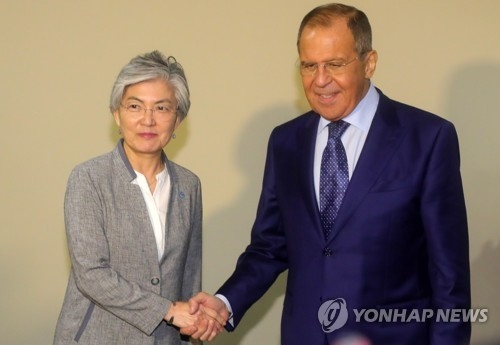 They noted the importance of maintaining the momentum created by President Moon Jae-in's state visit to Russia in June on the occasion of the World Cup football tournament there.

Kang requested Moscow's support for Seoul's initiative to bring lasting peace to the peninsula. Lavrov vowed partnerships on the peace process driven by a series of recent meetings, including inter-Korean summit talks, added the ministry.

Kang also met separately with Japanese Foreign Minister Taro Kono. They agreed that sanctions on Pyongyang should remain in place until the international community is assured of the North's "complete denuclearization." 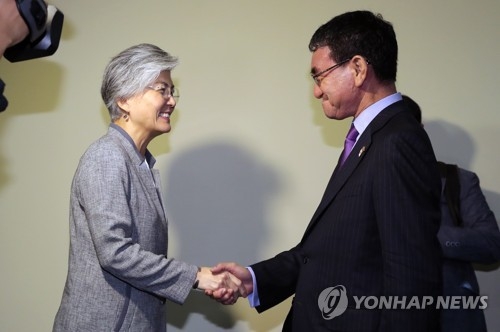 Kang was scheduled to hold a one-one-one meeting with Chinese Foreign Minister Wang Yi but it was postponed due to Wang's prolonged group meeting with ASEAN member states.

In an interview with The Straits Times, Kang said a schedule has not been set for her separate meeting with the North's Foreign Minister, Ri Yong-ho. He plans to arrive in Singapore on Friday morning to join the ASEAN Regional Forum (ARF) to open the following day.

"I have indicated my desire (for the meeting). I think it will be very useful. We don't have any concrete timeframe, but hopefully it happens," she said. "But if not, there will be other opportunities."

She was one of the first arrivals among the top diplomats of the ASEAN's dialogue partners.

The minister emphasized the need for a united front on Korean Peninsula affairs.

"What has brought us to this point is the unity of the international community in the message to North Korea," the minister said.

She recalled the previous ARF session held in Manila last year, in which member states sent a "very powerful" warning message to the North for sticking to provocative acts.

Kang voiced hope that members this year will help further strengthen the momentum for peace dialogue.

The 27-member ARF is the sole regional multilateral diplomacy channel in which Pyongyang is involved. The communist nation has endeavored to maintain or improve relations with Southeast Asian countries.