CHANGWON/SEOUL, Aug. 2 (Yonhap) -- Special prosecutors raided the residence and office of South Gyeongsang Province Gov. Kim Kyoung-soo on Thursday as part of an ongoing investigation into a massive manipulation of online political comments by an arrested power blogger.

Investigators were sent to search the premises in Changwon, 398 kilometers south of the capital, they said.

The blogger, better known as Druking, has been accused of manipulating clicks on Internet news comments to sway public opinion in favor of the ruling Democratic Party.

Kim, who was elected as the governor in the June local elections, allegedly communicated with Druking frequently through untraceable messenger apps. He has denied any involvement in the alleged crime.

Kim is currently on summer vacation and is scheduled to return to office soon, according to his office.

It is the second time the special prosecution sought to search Kim's workplace and home. They requested the first search warrant to a Seoul court Tuesday and were denied.

Prosecutors are said to have obtained enough evidence to compel Kim to a formal questioning as a suspect by summoning him possibly over the weekend.

They suspect Kim worked with Druking's crew to artificially jack up the number of likes for Internet comments attached to news articles about the DP, then the opposition bloc, between 2016 and early 2017.

In November 2016, Kim was invited by the Druking team to see a demonstration of a computer system designed to rig comments and gave them approval to carry out the alleged plan and let them brief him about it regularly.

The allegations have become a hot-button issue since Kim, a former DP lawmaker, is known for his close ties with President Moon Jae-in, and the time Druking is alleged to have worked on the rigging maneuver for the DP overlaps with the 2017 snap election that made Moon the new leader. 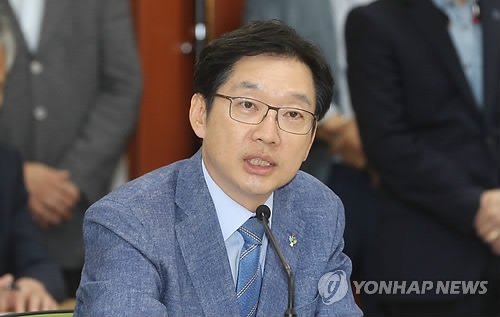