The Korean fantasy action film brought 1.24 million people to theaters on its opening day Wednesday, exceeding the 1.18 million recorded by "Jurassic World: Fallen Kingdom," according to a computerized box office tally from the Korean Film Council.

It became the first Korean film ever to draw over 1 million people on its first day.

Released on 1,968 screens nationwide, the Lotte Entertainment presentation dominated the local box office, earning 9.68 billion won (US$8.65 million) from 1.24 million admissions on the first day of its release.

The sequel to the 2017 box office smash "Along With the Gods: The Two Worlds" is now on pace to match the 2017 original's opening weekend total of 5 million viewers.

While the first film revolves around a firefighter named Ja-hong (played by Cha Tae-hyun) and his family as he is judged in seven hells for 49 days after his death, the newest film focuses on the pasts of the three grim reapers from the first film, played by Ha Jung-woo, Ju Ji-hoon and Kim Hyang-gi, who were human beings some 1,000 years ago.

It weaves together two main plots set in this world and the other. One revolves around Gangrim as he tries to reincarnate Ja-hong's aspiring lawyer brother Su-hong through multiple trials in the afterlife, and the other is centered on Haewonmaek and Deokchun, the two other grim reapers, who meet the Seongju God (House Guardian God) and come to know their secret pasts when they go to fetch another one of the dead. 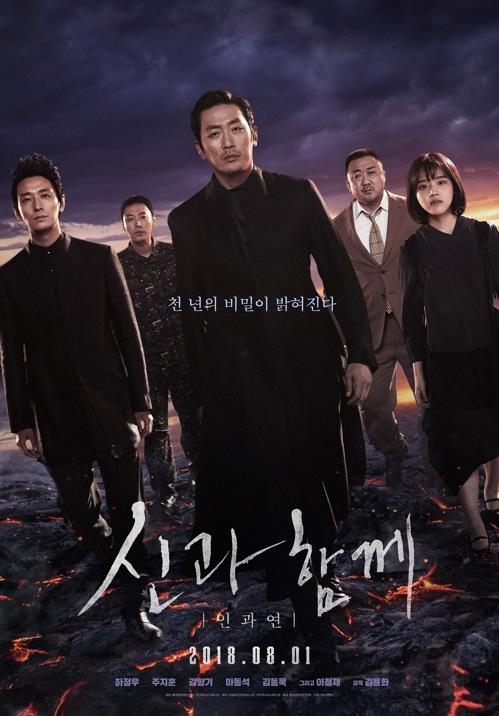 'Along With the Gods 2' sets opening day record in S. Korea

'Along With the Gods 2' sets opening day record in S. Korea