Do met with the athletes in volleyball, judo, boxing, taekwondo and karate at the Jincheon National Training Center in Jincheon, about 90 kilometers south of Seoul, and was also briefed on South Korea's preparations for the Aug. 18-Sept. 2 Asian Games in Jakarta and Palembang, Indonesia.

Do also spoke with players on the unified Korean women's basketball team, which is made up of nine South Koreans and three North Koreans. 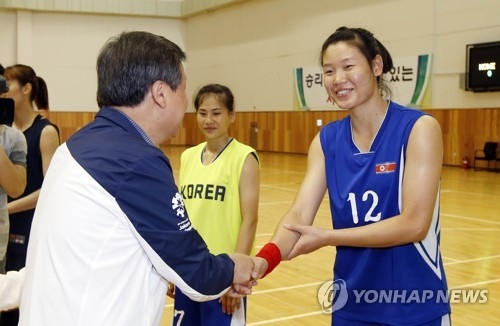 "I am happy to see that South and North Korea have come together to compete as one team, and the people are all behind you," Do told them. "I want to thank you for leading the way toward prosperity and harmony."

Jong Song-sim, an assistant coach from the North, said the Asian Games will be an opportunity for the Koreas to show the world how strong they can be when united.

"We may not have much time left until the Asian Games, but we can win the gold medal if we can all come together," Jong added.

The Koreas will also have joint teams in dragon boat racing, a canoeing discipline, and three events in rowing. The canoeists and rowers began training together at Chungju Tangeum Lake International Rowing Center in Chungju, 150 kilometers south of Seoul, earlier this week, and Do visited them Tuesday. 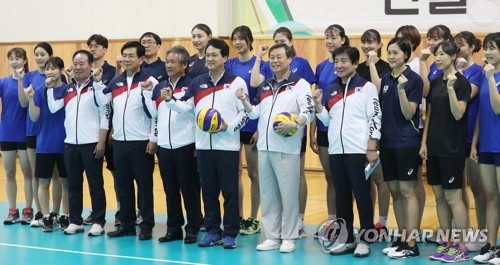 During his meeting with the women's volleyball team, Do received an autographed ball from Kim Yeon-koung, the team's best player.

At Jincheon, Do mingled with athletes in other sports as he had lunch with them in the cafeteria.

"You are the pride of the nation," Do addressed the athletes and coaches. "I hope you will all achieve the desired results, and send a message of peace and harmony at the Asian Games."

South Korea will send 960 athletes and officials for 39 sports to Indonesia.