Saudi Arabia allowed women to drive cars for the first time on June 24.

Hyundai said it released a promotional video under the slogan "whatsnext," which is centered on women empowerment by showing females from various careers in Saudi Arabia.

Hyundai said it opened a "City Store" digital showroom at a shopping mall located in the capital city of Riyadh. The carmaker said female staff will greet visitors and help them to experience its vehicles.

The company said it plans to open similar showrooms in other major cities in Saudi Arabia down the road.

Other localized features include an alarm system that can notify women when their traditional garment, abaya, is stuck in doors.

"We will make various efforts to support females of the millennial generation, including those from Saudi Arabia, who are becoming major consumers around the globe," Hyundai said.

Hyundai Motor currently operates in 14 countries in the Middle East region, generally focusing on selling cars like the Accent, Elantra and Sonata.

The rise of female drivers in Saudi Arabia has been cited as one of the major business opportunities for carmakers, especially since the global market is undergoing slower growth. 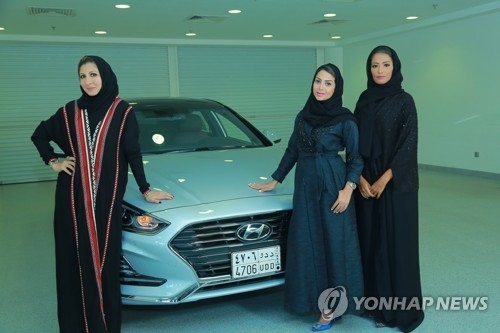