WASHINGTON, Aug. 1 (Yonhap) -- The remains of presumed U.S. soldiers killed in the 1950-53 Korean War returned home on Wednesday to a solemn ceremony in Hawaii, marking the beginning of a long process to identify thousands of missing troops.

U.S. Vice President Mike Pence was at Joint Base Pearl Harbor-Hickam, Hawaii, to receive the 55 cases of remains that North Korea returned last week as part of an agreement reached in June by its leader Kim Jong-un and U.S. President Donald Trump.

The boxes were unloaded from two U.S. military aircraft, which transported them from an air base outside of Seoul, according to news reports.

"Some have called the Korean War the 'forgotten war.' But today, we prove these heroes were never forgotten. Today, our boys are coming home," Pence said in a speech at the ceremony.

"Our work will not be complete until all our fallen heroes are accounted for and home. We will see to it in the days ahead that these heroes will be the heroes who led the way to many more homecomings in the future," he said. 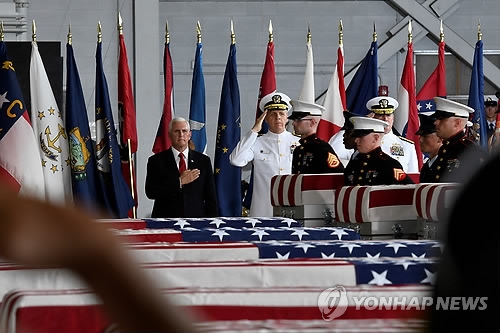 The remains will undergo forensic identification at a Defense POW/MIA Accounting Agency lab at the base in Hawaii.

The process could take months, if not years, as family members wait to find closure in their decadeslong search for the fallen troops.

Trump thanked Kim on Friday shortly after the remains were airlifted from North Korea to South Korea.

"I want to thank Chairman Kim for keeping his word," he told reporters outside the White House. "We have many others coming. But I want to thank Chairman Kim in front of the media for fulfilling a promise that he made to me, and I'm sure that he will continue to fulfill that promise as they search and search and search. These incredible American heroes will soon lay at rest on sacred American soil."

Recovering and returning the remains was part of the agreement the two leaders signed at their historic summit in Singapore on June 12.

While it is hoped that the repatriation will give momentum to implementing the key element of the deal -- the dismantlement of North Korea's nuclear weapons program -- progress has reportedly been slow to secure firm commitments from Pyongyang in that regard.

North Korea's return of the remains Friday coincided with the anniversary of the signing of the Armistice Agreement, which ended fighting in the war. Pyongyang has called for a formal declaration to end the war, viewing it as a guarantee of its security in exchange for denuclearization.

Pence, whose father was a Korean War veteran, said he has "never been more humbled" to represent the president.

"We don't know who will come off these planes today, but we do know they are heroes all," he said.

En route to Hawaii, Pence stopped in California to pick up two family members of missing American soldiers. Diana Brown Sanfilippo and Rick Downes lost their fathers -- both pilots and first lieutenants -- in the war when they were three or four years old.

The vice president acknowledged their presence at the ceremony, saying he was honored to have them.

The United States estimates that the remains of some 5,300 American soldiers have yet to be recovered from North Korea.