The minister stressed that the private sector's role for innovative growth is very important. "The government will continue efforts for deregulation as well," he said.

As part of efforts to spur investment in startups and venture firms, the government seeks to ease regulations on venture holding companies.

Meanwhile, the finance minister said the authorities will take measures against any fallout stemming from widely expected rate hikes in the United States.

"The FOMC will raise the rate as scheduled unless there are unexpected events," Kim told reporters after the meeting. "We have to respond to that scenario."

The U.S. Federal Reserve on Thursday kept the interest rate unchanged as widely expected but said U.S. economic growth is strong and the job market is continuing to strengthen.

"The U.S. Fed is expected to deliver two more rate hikes this year and three rate raises next year," Kim said. "The government is also looking at other external factors such as the U.S.-China trade row and economic conditions in the European Union."

"That's because social infrastructure projects have a far-reaching impact on the regional economy and help stabilize the job market," Kim said. 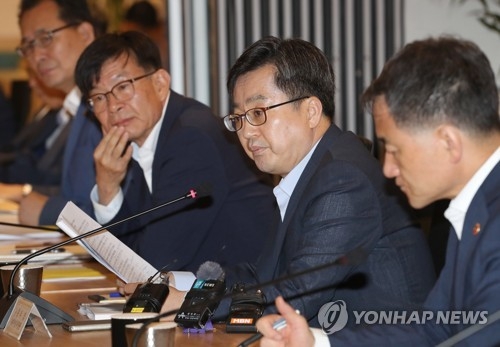