The triathlon team to compete at the Aug. 18-Sept. 2 Asian Games in Jakarta and Palembang, Indonesia, hosted a launching ceremony in Seoul. The triathlon events will be held on Aug. 31 and Sept. 1 in Palembang.

Triathlon first became an Asian Games medal sport in 2006. South Korea has won two medals so far -- a women's bronze by Jang Yun-jung in 2010 and a mixed relay silver in 2014.

The athletes on Thursday said they want to do one better this time. 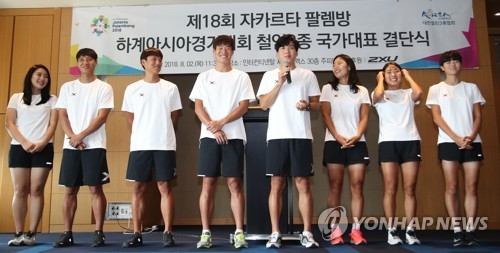 "I have an individual medal, but I'd like to win a relay medal with my teammates this time," said Jang, who missed the 2014 Asian Games with an injury.

Three members from that silver medal-winning team -- Heo Min-ho, Kim Ji-hwan and Jeong Hye-rim -- are back for their second Asian Games together.

Of the three, Jeong, the 2016 world juniors bronze medalist, will make her Asian Games debut in the individual event. Still just 18, she wasn't old enough to be eligible for the individual race four years ago.

"I am glad to be racing in the individual event, but winning a relay gold is more important," Jeong said. "The weather has been so hot in Korea that it's going to help us prepare for the heat in Indonesia."

Heo, a 28-year-old who's been competing internationally for 10 years, said he'd like to cap off his Asian Games career with a gold medal.

"I am much prouder now to be preparing for my last Asian Games than I was when I first made the national team," Heo said. "I'll continue to do my best over the next 30 days and bring home a gold medal."