SEOUL, Aug. 2 (Yonhap) -- South Korea will look into BMW Korea over its alleged delay in the recalling of more than 100,000 passenger cars, an official said Thursday, as the latest vehicle fire is fueling safety concerns.

A BMW 520d sedan caught fire while being driven on a local expressway at 11:47 a.m. on Thursday in eastern South Korea, according to police. The accident raised to 28 the total number of fires that consumed BMW vehicles so far this year.

About half of the affected models are BMW 520d sedans, according to the Ministry of Land, Infrastructure and Transport.

Last week, BMW Korea announced a voluntary recall of 42 different models, totaling 106,317 vehicles, to fix a faulty component that appears to have caused fires in the engine area.

On Thursday, the driver told police that the car's brakes did not work, with the fire occurring in the front of the vehicle as soon as she pulled over to the side of the road.

Investigators said the passengers immediately disembarked from the car and that there were no casualties. The fire was extinguished after 20 minutes.

The German carmaker has identified the exhaust gas recirculation -- one of the principal methods used to reduce nitrogen oxide emissions from diesel engines -- as the main cause of the recent fires in the engine compartment of the 520d sedan.

"We will probe into whether BMW Korea intentionally delayed issuing the recall," said Kim Kyung-wook, an official handling the issue at the ministry.

He said a key issue is whether BMW Korea was aware of defects in the vehicles.

If BMW Korea is found to have intentionally delayed issuing a recall, it could be fined 1 percent of its sales revenue last year. 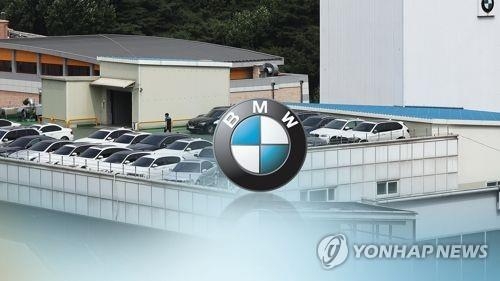