JINCHEON, South Korea, Aug. 2 (Yonhap) -- Less than a month after they got together for friendly games, women's basketball players from South and North Korea have been reunited here for the Asian Games.

There will be nine South Koreans and three North Koreans competing on the unified team at the Aug. 18-Sept. 2 Asian Games in Jakarta and Palembang, Indonesia. They started their joint training Wednesday at the Jincheon National Training Center in Jincheon, 90 kilometers south of Seoul, and opened their practice to pool reporters at the same venue Thursday. 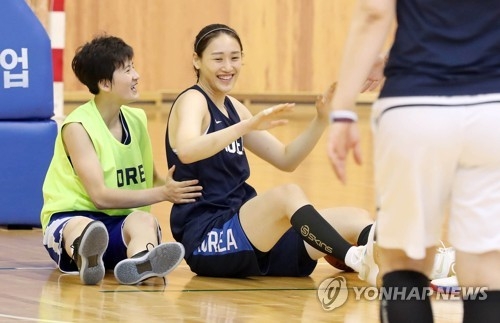 The Korean players are already familiar with one another, as they met during friendly matches in Pyongyang on July 4 and 5.

Meanwhile, the ones who made it to Jincheon were hard at work Thursday. South Korean Sports Minister Do Jong-whan also paid a visit to deliver a message of support and encouragement.

"I'd like to welcome everyone from the North, and I am happy to see that South and North Korea have come together to compete as one team," he told the players. "The people are all behind you. I want to thank you for leading the way toward prosperity and harmony."

Jong, the North Korean coach, told Do that the players from both sides had become quick friends during their previous meeting in Pyongyang, and there was no awkwardness when they were reunited this week.

"We may not have much time left until the Asian Games, but we can win the gold medal if we can all come together," Jong said. "We'll show the world how strong we can be and give our 70 million people something to cheer about."

Lee Moon-kyu, the South Korean head coach in charge of the joint team, said building strong teamwork over the next 10 or so days will be crucial. Since South Korea was away last week for a tournament, Lee said the time crunch has forced him to schedule two-a-days -- five hours per session.

"South Korean players have appeared in 30 to 40 games (leading up to the Asian Games) so they're well-conditioned," Lee said. "But we still haven't figured out where the North Korean players are, in terms of their fitness and conditioning."

Lee said he'd asked for Ro and Jang from North Korea after watching them play in Pyongyang in friendlies. He'd also requested another player, forward Ri Jong-ok, though Kim Hye-yon made the team instead.

"We're hoping the North Korean players can complement the South Korean team and fill our needs," the coach said. "They're the three best players from North Korea. Ro Suk-yong is a good scorer with size. And we have to get Jang Mi-gyong and Kim Hye-yon involved in plays."

"No matter how good she is, you can't do it all by yourself in basketball," the coach said. "Whether she can join us or not, I just hope we find out quickly."

Lee's team will depart for Indonesia on Aug. 13.

South Korea is the defending Asian Games champion. In this year's Asian Games, the unified Korean team has been paired with Taiwan, Indonesia, Kazakhstan and India in Group X. The top four teams out of that group will reach the quarterfinals, joined by the top four from Group Y, where China, Japan, Thailand, Hong Kong and Mongolia will play.

Korea's first match will be against Indonesia on Aug. 15. 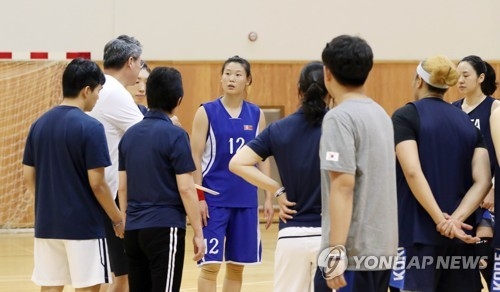