SEOUL, Aug. 2 (Yonhap) -- The music video of sensational K-pop rapper and singer Psy's "Gangnam Style" has ranked 12th on Billboard's list of the 100 greatest music videos of the 21st century.

"It's hard to believe that it's been over half a decade since the satirical dance track Gangnam Style took the world by storm to become the first-ever video to be viewed over 1 billion times," one critic said of Psy's hit song.

"With its over-the-top antics aimed at mocking the denizens of Seoul's Gangnam neighborhood, numerous cameos from local comedians and pop stars, and its easy-to-learn equine choreography, Psy's video became a surprise global sensation that turned all eyes to South Korea's music industry," the critic said. "Though it's no longer the world's most-viewed music video, the legacy of Gangnam Style remains."

The 2012 dance song by Psy claimed the No. 2 spot of the highly competitive Billboard Hot 100 song charts for seven weeks in a row, making K-pop history. The accumulated viewership for the music video of the song stood at over 3.1 billion people as of Thursday. 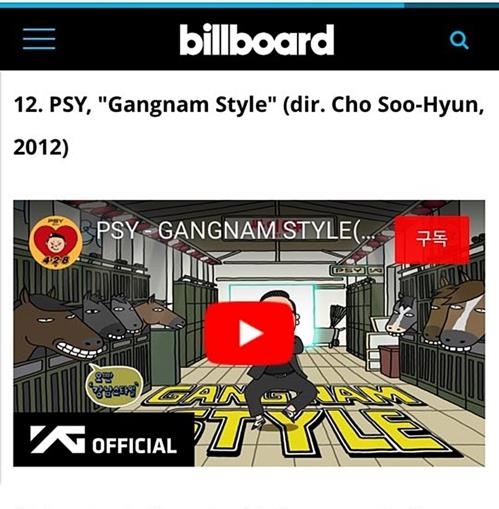