SEOUL, Aug. 3 (Yonhap) -- When you have to plan overseas travel on short notice, there are not many choices. And if you have to go with your aged parents, who want a decent, comfortable stay at hot springs, even fewer options are available.

The destination has to be close to home, because more than a two-hour flight may be too much for older people. Also, the place needs to have well-furnished hotels, nice places to eat and spa services.

A few days earlier, she organized a family trip to celebrate her mother's 60th birthday for the second week of August. She had to make flight and hotel reservations in the middle of the peak summer vacation season with very little time.

But it did not take too much effort for Kim to arrange everything for a trip to Yufuin and Fukuoka on the southwestern island of Kyushu, where she visited a couple of times in the past.

This is because there are so many flights available online for reasonable prices. She booked a room at a ryokan, a traditional Japanese inn with hot spring bathing facilities, for her mother.

"Japan is the perfect place to go on a trip on very short notice. There are a number of cheap plane tickets and various types of hotels and guest houses," said Kim. "And Japan is a familiar place for me to go with my parents, who are strangers to overseas trips."

This will be her second visit to the neighboring country in 2018 alone, following a four-day trip to Tokyo in April. So far, she has already been to Tokyo, Osaka and Sapporo several times.

"I like Japan. It's close and cheap. Food is delicious and facilities are great!" she said. "Every time I go to Japan, I am satisfied with all things there. It's good to go with friends and should be nice with parents as well."

Kim is not the only Japan-holic in South Korea. Some 7.14 million South Koreans visited Japan last year, up 40.3 percent from a year earlier. For the first five months of this year, the number has reached 3.41 million already, outpacing 3.3 million Chinese visitors, the longtime No. 1. 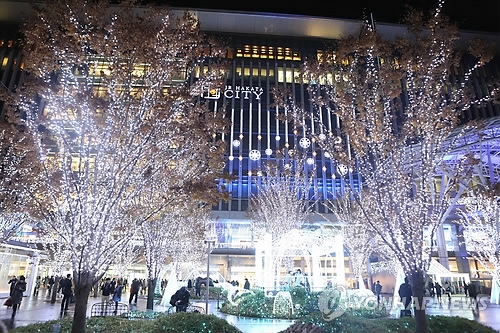 The popularity is fueled in part by heightened competition among budget air carriers, such as Jin Air Co., Eastar Jet and T'way Air Co., that offer seats at low prices. And as a bonus they even fly to smaller cities in Japan, such as Kumamoto, Miyazaki, Oita and Kagoshima, thereby preventing the hassle of getting off a plane at a larger airport and then taking a connecting flight, or using other forms of transportation.

Major air carriers joined the race to woo flyers as Korean Air Lines Co. runs regular schedules to 11 Japanese cities other than Tokyo and Osaka, while No. 2 Asiana Airlines Inc. has nine routes to Japan.

Moreover, Asiana launched its new low-cost subsidiary Air Seoul last year and sold round-trip tickets to Osaka for 70,000 won (US$62), further fueling competition. It costs some 60,000 won to go to the southeastern port city of Busan from Seoul one-way by train.

"If you find a good deal, you can go to Fukuoka on a weekend for about 100,000 won and enjoy an eel rice bowl for dinner. It's that simple," said Choi Jung-in, who also went to Fukuoka with her mother a week ago. "And there are a lot of things to do in Japan. Shopping and dining are the best."

Before going to Japan, tourists download a list of must-have items in Japan from the Internet. It varies from Japan-made cosmetics, sweets and medicines to clothes, tableware and electronic devices.

In Don Quijote stores, a leading Japanese discount chain, it is easy to find Korean shoppers who are busy buying up candies and beauty items.

Up-to-date lists of fancy restaurants and delicious Japanese dishes are floating on the Internet too, with detailed descriptions of the way to get to various places along with objective customer reviews and comments.

The recent trend of the weakening Japanese currency also played a role in attracting South Korean fans to the neighboring country. The South Korean won hovered around 1,000 won against 100 Japanese yen throughout 2017, compared to the 1,100 won averaged in 2016.

"Everything is high-priced in Japan, especially subway tickets. A few years ago. it was more expensive for me because of the unfavorable exchange rate," said Kim Ju-yeon. "But nowadays, it feels cheaper as the Korean won has become stronger vis-a-vis the yen. That helps with shopping and eating."

At the same time, a diplomatic row over the U.S.-led missile system, or THAAD, between Seoul and Beijing last year fueled flocks of South Korean tourists heading to Japan instead of China.

As a result, the number of South Korean air passengers to China tumbled 29.8 percent in 2017 from a year earlier, while passengers flying to Japan jumped 26 percent on-year, according to government data.

"People tend to place more importance on so-called valuable consumption as they enjoy activities or shopping that are satisfying," said an employee from Mode Tour Network Inc., a leading tour agency. 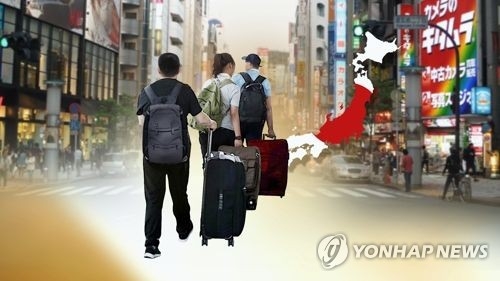