SEOUL, Aug. 3 (Yonhap) -- South Korea's foreign reserves continued to break records for the fifth month in a row in July thanks to steady gains from investments and a weaker U.S. dollar, the central bank said Friday.

The total value of the country's foreign exchange reserves came to an all-time high of $402.45 billion last month, up $2.15 billion from a month earlier, according to the Bank of Korea (BOK).

The BOK said the on-month gain was due to a rise in proceeds from foreign asset investments as the value of foreign securities, like government bonds and corporate debts, amounted to $374.91 billion last month, up $7 billion from a month earlier.

Also, in July the U.S. dollar index lost 1 percent on-month against the currencies of six major economies that increased the value of non-dollar currencies when converted into the greenback.

The country's reserve position at the IMF stood at $1.92 billion at the end of July, while holdings in gold bullion were worth $4.79 billion during the same period, the central bank said.

As of the end of June, South Korea ranked ninth among countries with the largest foreign reserves. China topped the list, followed by Japan and Switzerland. 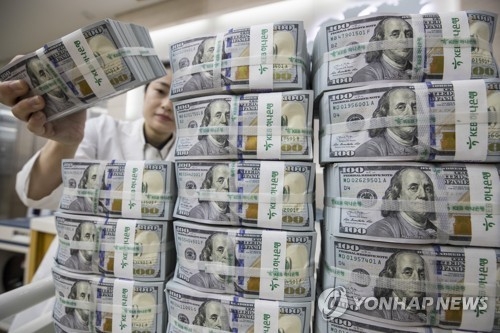