SEOUL, Aug. 2 (Yonhap) -- New U.S. Ambassador to Seoul Harry Harris on Thursday called on North Korea to make "demonstrable moves" toward denuclearization before the declaration of a formal end to the 1950-53 Korean War.

The retired admiral made the call amid reports that the communist state has been demanding the political declaration as part of efforts to ensure the security of its regime, with the U.S. pressuring it to first take tangible steps toward nuclear disarmament.

"One of the things that hasn't happened is the demonstrable moves toward denuclearization before we can entertain something like the end-of-war declaration," the ambassador said during an interview with local media.

"I think for the denuclearization to happen, we need to see the move and I haven't seen that yet," he added. 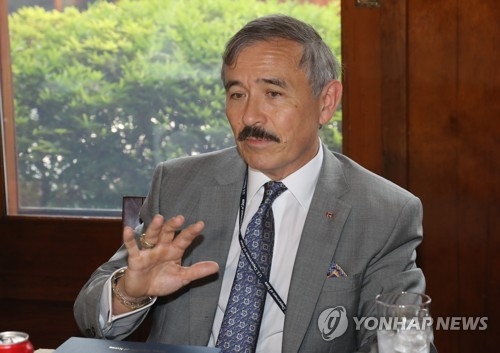 Concerns have been rising about a lack of progress toward realizing the June U.S.-North Korea summit agreement goal of the "complete denuclearization" of the peninsula, with a flurry of reports saying Pyongyang appears to be advancing its nuclear and missile programs.

Regarding the issue of the end-of-war declaration, Harris cautioned against being "precipitous."

"It is my hope that we move forward the issue of the end of war declaration with South Korea," he said "This, in my view, should be an alliance decision and we should not be precipitous in declaring an end of the war."

The goal of making the declaration by the end of this year is part of the April inter-Korean summit agreement. Some observers have raised the possibility that the leaders of the two Koreas and the U.S. could consider the declaration on the sidelines of the U.N. General Assembly in New York in September.

Harris arrived in Seoul last month to fill the ambassadorial post that had been vacant since his predecessor, Mark Lippert, stepped down upon the inauguration of Donald Trump in January last year.