CHUNCHEON, South Korea, Aug. 3 (Yonhap) -- The city of Chuncheon in northeastern South Korea is set to hold a K-pop concert to highlight the 2018 World Leisure Games, which will kick off later this month, organizers said Friday.

The concert will start at 7 p.m. on Aug. 25, one day after the opening of the four-day international sports event, its seventh run since 2010 when it was first hosted by the city, 85 kilometers east of Seoul, to promote outdoor activities to people of all ages worldwide and help develop the lakeside city's leisure industry.

A total of 11 acts -- top idol groups and singers -- will perform at the entertainment event to be staged at the main stadium of Songam Sports Town in the city, Gangwon Province. On the bill are: SHINee, NU'EST W, B.A.P., Bromance, Emily, gugudan, Dreamcatcher, BaBa, Nature, Park Hyun-bin and Kim Yeon-ja. 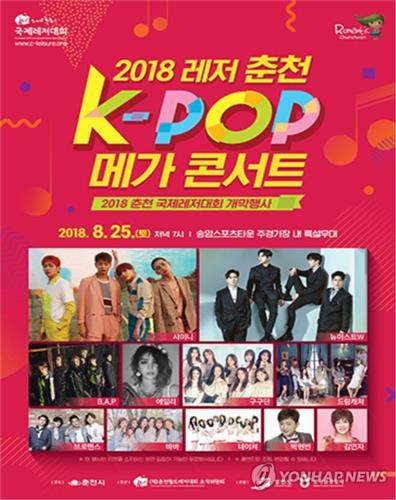 According to organizers, expectations for the event are running high as more than 2,500 overseas tourists have so far made ticket reservations to attend.

Prior to the concert, a group of dancers taking part in a world dance competition of the International Dance Organization (IDO) will put on a show to celebrate the sports event.

In this year's global festival, some 6,500 athletes from 30 countries are expected to gather to compete for championships in 14 international and local leisure sports, the event's organizers said.

The IDO, a world dance and dance sports federation, is scheduled to hold this year's general assembly and the World Street Dance Cups in the city simultaneously with the international leisure competition, helping it become a global sports festival.

The IDO general assembly, which will be held at Benikea Chuncheon Hotel from Aug. 17-22, is expected to bring together 100 representatives of member countries and international referees. 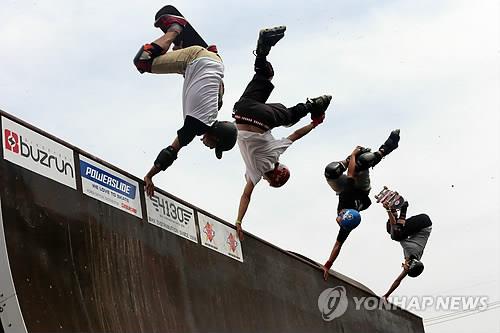 Organizers also plan to hold a parade for participating countries at 1:30 p.m. on Aug. 25 as part of events to draw more visitors to the international sports event.

The Games will also offer visitors a variety of programs and tourist attractions, organized by 29 industrial bodies, including a cooperative of small business owners. Among the programs are a tea ceremony, an event for wearing traditional Korean attire, "hanbok," and making dolls.

Other programs include a radio show with a live audience, to be held by the broadcaster MBC, a band festival and a film festival. DJ Water Party, or a water gun festival together with music, and a song contest will also be held during the Games.

A team from Kangwon National University will hold an industrial fair on the industrialization of leisure. A total of 15 leisure-related companies are set to show off their products and services at the fair.

In connection with the closing of the Games, organizers will hold a forum at the university on Aug. 27 to discuss ways to beef up the leisure and sports industry and provide the theoretical groundwork for the industry's development.

Kim Man-ki, deputy mayor of the city, expressed hope that the upcoming sports event will help promote Chuncheon as a city endowed with surroundings to enjoy leisure activities.

"We are taking thorough measures to make the event successful," Kim said, adding, "In the forum, we will try to come up with a direction in which the annual sports event will make further development." 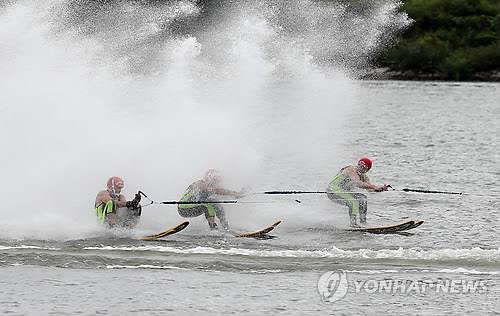