SINGAPORE, Aug. 2 (Yonhap) -- China's top diplomat expressed support Thursday for the declaration of a formal end to the Korean War, saying such a declaration is in line with the trend of the time as nobody wants a repeat of the conflict on the peninsula.

"So the issue, the declaration of the end of the war, is in keeping with the trend of our time and reflects the aspiration of people of all countries, including the two countries on the Korean Peninsula," he said through an interpreter at a press conference. He is in Singapore to attend the annual ASEAN-related meetings.

Making a gesture of ending the war with the declaration by the two Koreas or other parties is "obviously a good, positive thing," he added.

Wang's remarks represent Beijing's clearest-yet statement on the issue amid a cautious approach by Washington. 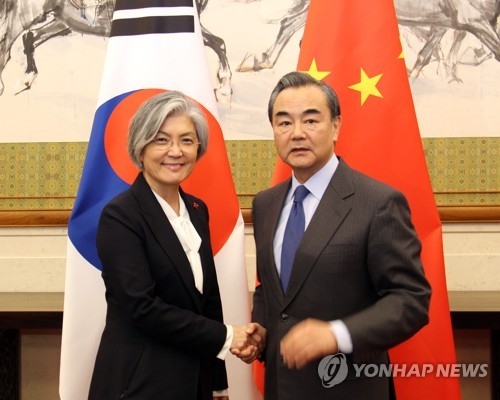 China has long said it's willing to play a constructive role in the Korea peace process but it has been vague on the proposed war-ending declaration.

He skipped answers to the specific questions of whether there needs to be any precondition for the largely symbolic, legally non-binding declaration and China should be involved in the process.

He drew a line between the declaration and efforts to replace the Armistice Agreement with a peace treaty.

"These two things are two different ones," he said, adding such a peace treaty should be signed by all the parties concerned. China is a signatory to the 1953 document, together with the U.S. and North Korea.

In Seoul, U.S. Ambassador to South Korea Harry Harris stressed that there should be tangible progress first in denuclearization for the political move, which is linked to security assurances for Pyongyang.

"One of the things that hasn't happened is the demonstrable moves toward denuclearization before we can entertain something like the end-of-war declaration," he told a group of reporters.

South Korea hopes to declare the termination of the three-year war by the year's end. North Korea is also eager for that.