WASHINGTON, Aug. 2 (Yonhap) -- The United States is open to discussions about a second meeting between President Donald Trump and North Korean leader Kim Jong-un, but nothing has been planned yet, the White House said Thursday.

Trump and Kim held their first summit in Singapore in June and agreed to the complete denuclearization of the Korean Peninsula in exchange for security guarantees from the U.S.

Trump tweeted early Thursday that he looked forward to seeing Kim soon as he thanked the North Korean leader for the return of the remains of presumed American soldiers killed in the 1950-53 Korean War.

"There is not a second meeting that is currently locked in or finalized," White House press secretary Sarah Sanders said during a regular press briefing. "Certainly open to that discussion, but there isn't a meeting planned."

Trump has said that he would be open to inviting Kim to the White House. There is also talk of a possible meeting on the sidelines of the United Nations General Assembly in September. 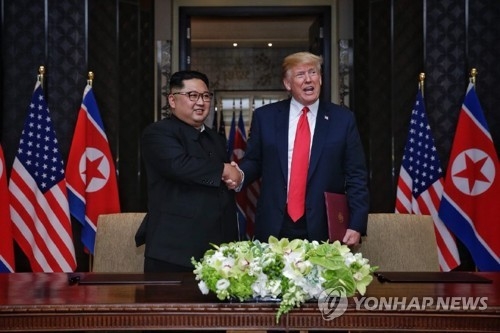 In Thursday's tweet, Trump also thanked Kim for his "nice letter," but did not elaborate.

Sanders said in a statement that the letter was received Wednesday as part of ongoing correspondence "aimed at following up on their meeting in Singapore and advancing the commitments made in the US-DPRK joint statement."

She later added in the press briefing that Trump has responded to the letter.

"That letter will be delivered shortly," she said. "I can say that the letters addressed their commitment from their joint statement that was made at the Singapore summit and they're going to continue working together towards complete and total denuclearization."

Asked if Trump is satisfied with the progress North Korea is making on denuclearization, she replied, "The president won't be completely satisfied until all of Korea has been denuclearized."

But Sanders acknowledged "steps of progress and continued cooperation" with North Korea, citing the regime's repatriation of 55 cases of remains in line with the leaders' joint statement.

The remains arrived in Hawaii Wednesday to undergo forensic identification. A solemn ceremony was held upon their arrival with U.S. Vice President Mike Pence and family members of the missing American troops in attendance.