Oh tossed a perfect inning out of the bullpen against the St. Louis Cardinals at Busch Stadium in St. Louis on Thursday (local time), preserving the Rockies' 2-1 lead in the seventh.

The Rockies lost the game 3-2 on a two-run, walk-off single by Jose Martinez in the bottom of the ninth, with closer Wade Davis blowing his fifth save opportunity of the year. 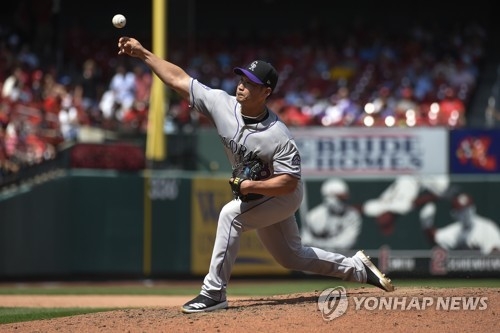 Oh lowered his ERA from 2.52 to 2.47 in 51 innings, across 52 appearances. He's not been scored upon in four straight outings since joining the Rockies in a trade from the Toronto Blue Jays on July 26, though Oh did allow two inherited runners to cross the plate in his previous game Tuesday.

Dating back to his Blue Jays days, Oh has held opponents to one earned run in his last 16 2/3 innings, with 18 strikeouts against two walks.

In Thursday's game, Oh struck out pinch hitter Dexter Fowler swinging on a 1-2 fastball. Oh then retired Matt Carpenter, named the Player of the Month in the National League for July after hitting a Major League Baseball-leading 11 home runs, on a flyout to right field.

Yadier Molina grounded out to shortstop against his former batterymate, as Oh picked up his 16th hold of the year.