North Korean Foreign Minister Ri Yong-ho had bilateral talks with his Chinese counterpart Wang Yi at the Singapore EXPO convention center, the venue of the ASEAN Regional Forum (ARF) to open on Saturday.

Ri was seen by South Korean reporters entering a room where Wang stayed. An informed source also confirmed their meeting.

The North's minister arrived here earlier in the day, his first major overseas trip since the June 12 summit between Pyongyang and Washington held in this city-state.

It remains uncertain whether he will hold one-on-one talks with U.S. Secretary of State Mike Pompeo, who's also participating in the ARF. 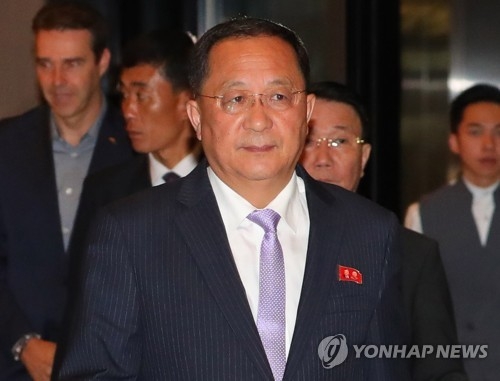 Pompeo is scheduled to have separate talks with the Chinese minister later Friday.

South Korea's Foreign Minister Kang Kyung-wha has offered bilateral talks with Ri but he has not responded yet, according to Kang's aides. 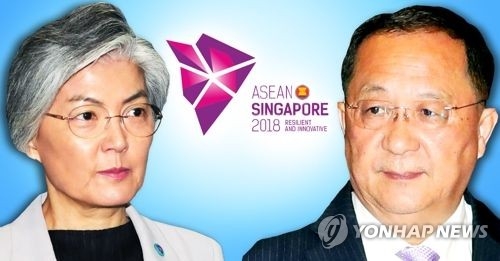 If Kang and Ri sit down together for a formal bilateral meeting, it would the first foreign ministerial talks between the two Koreas in a decade.

It's expected to help further spur inter-Korean reconciliation and send a message to the Trump administration as the two sides hope to declare a formal end to the 1950-53 Korean War at an early date.

Washington is cautious about the political gesture, urging Pyongyang to take concrete steps toward denuclearization first. Critics say such an end-of-war declaration may be viewed as the abandonment of military options in the eyes of North Koreans and may weaken their denuclearization commitment.

U.S. officials have been noncommittal about the possibility of Pompeo's separate meeting with Ri here.

The ARF, a gathering of more than two dozen top diplomats, "provides a platform for a lot of interaction -- some sit-down meetings, some sidebar meetings, some pull-asides, some chance encounters -- to address challenges in the region or other business," a State Department official, accompanying Pompeo on his ongoing Asia tour, said on background.