Uriminjokkiri, the North's external propaganda website, shed light on Hyundai Group's work and its relations with Pyongyang in time for a trip by group officials to Mount Kumgang to attend a memorial service for late chairman Chung Mong-hun.

Chung spearheaded the now suspended tour program to the North Korean mountain. His wife and current chairwoman Hyun Jeong-eun was among the visitors.

The ceremony was attended by some 20 North Korean officials and 30 Hyundai officials, according to the company.

"We have expectations to resume the tour program within this year. That's what the North was thinking too," Hyun told reporters after her visit.

Yet the chairwoman said she did not have detailed discussions on the possible resumption of inter-Korean projects with the North Korean officials.

During a meeting with Hyun in 2005, the website said that the North's then leader Kim Jong-il delivered condolences for the death of Chung, emphasizing that the North began its "first love" with Hyundai in terms of improving inter-Korean relations way ahead of its cooperation with the Seoul government.

Kim also praised Chung for his devotion to advancing relations between the two Koreas, calling him a "patriotic business person" who followed in the footsteps of his late father and group founder, Chung Ju-yung, according to the website.

"It was not an easy decision that anyone could make to launch the tour program to Mount Kumgang located near the frontline where the two Korea's armed forces are standing up against each other," it said.

The spotlight on Hyundai Group and its business in the North appears to be intended to create a favorable mood for resumption of the long-suspended business.

The tour program to Mount Kumgang was launched in 1998 as a joint inter-Korean project run exclusively by Hyundai Group.

It attracted nearly 2 million tourists until South Korea halted it in July 2008 after a female South Korean tourist was shot dead by a North Korean guard near the resort. The North revoked Hyundai's business license for the program in 2011.

With a thaw in inter-Korean relations following the April summit, the North has been stepping up its demand for resumption of cross-border economic projects in recent months.

The North's Rodong Sinmun earlier called on the Seoul government to resume the tour program, saying that its operation has nothing to do with sanctions.

The government earlier approved a request by Hyundai Group officials to travel to Mount Kumgang to attend the memorial service for Chung on Friday, raising expectations for possible resumption of the tour program.

Seoul and Washington have said full-blown economic engagement with the North should wait until after the North completely gives up its nuclear weapons program.

In August 2003, Chung jumped to his death from his office in Seoul amid a scandal over Hyundai's secret payment of US$500 million to North Korea before the 2000 inter-Korean summit. 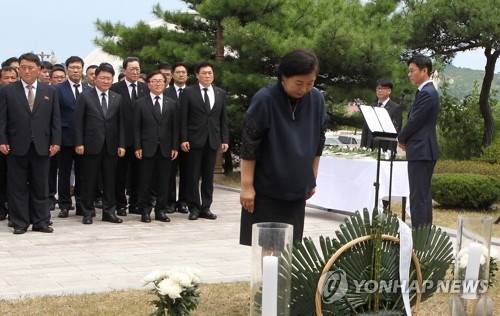