CHANGWON, South Korea, Aug. 3 (Yonhap) -- South Gyeongsang Province Gov. Kim Kyoung-soo on Friday rejected allegations that he offered a diplomatic position to a power blogger with expertise in manipulating Internet comments while asking for help in this year's local elections.

Kim called the allegations "totally untrue" as he spoke to reporters a day after special investigators raided his office and residence in the southeastern city of Changwon as part of a probe into the online opinion rigging scandal.

The scandal centers on allegations that the blogger, better known by his nickname Druking, massively manipulated comments on Internet news stories in an effort to sway public opinion on hot-button political issues in favor of the now-ruling Democratic Party.

Kim, a former DP lawmaker who was elected governor in June's elections, allegedly communicated with Druking frequently through untraceable messenger apps. Special investigators also suspect that Kim offered the position of the consulate general in the Japanese city of Osaka to Druking while asking for help in this year's elections.

Kim denied the suspicions and involvement in any other wrongdoing.

Asked if he has been summoned to appear for questioning, Kim said he hasn't heard from the investigators yet.

It was the second time the special prosecutors sought to search Kim's workplace and home. They requested the first search warrant to a Seoul court Tuesday but were denied.

Prosecutors are said to have obtained enough evidence to bring Kim in for formal questioning as a suspect by summoning him, possibly over the weekend. 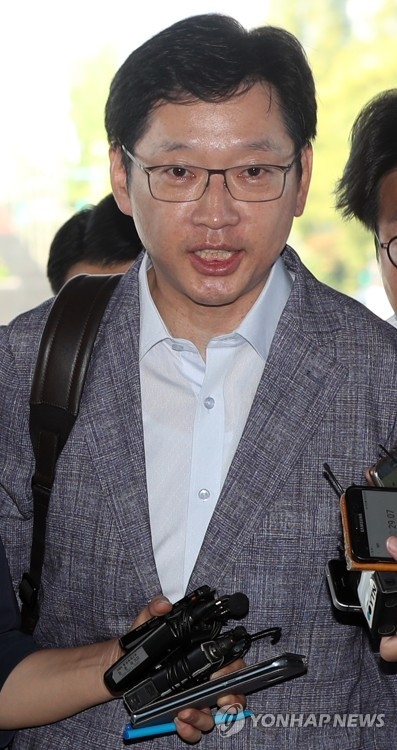