SEOUL, Aug. 3 (Yonhap) -- The ruling Democratic Party (DP) said Friday that it will form a task force to look into a controversy over the military intelligence unit's documents that reviewed the possibility of imposing martial law last year to quell anti-government protests.

The task force, which will be launched Monday, will consist of DP lawmakers from the parliamentary committees on defense, house steering and intelligence, it said. It will be headed by Rep. Min Hong-chul.

The Defense Security Command (DSC) is found to have devised detailed plans for declaring martial law to curb demonstrations against then-President Park Geun-hye impeached for corruption.

Rival parties have exchanged barbs over the DSC documents for weeks, with the DP insisting that the documents point to a de facto attempt for a coup or a rebellion.

"We need to look into the possibility that the DSC reported the documents to (the presidential office Cheong Wa Dae) after writing them probably in February or March in 2017," said Kim Hyun, spokeswoman at the DP.

She also said that the task force will also probe into the main opposition Liberty Korea Party's claim that the unit wrote similar documents in 2004, when former liberal President Roh Moo-hyun was impeached.

The LKP, which was the ruling party under Park's government, insisted that the DP is staging politically charged attack on it by accusing the party of colluding with what the governing party called an attempted rebellion.

The LKP has called for a parliamentary investigation into the 2004 and 2017 cases, but the DP said that the conservative party is trying to divert public attention with the probe proposal.

Parties earlier agreed to hold a hearing after a team of special investigators announces the results of its probe into the DSC's documents.

Min, the chief of the DP, told reporters that the DSC's 2004 documents were totally different from the 2017 ones, adding that one of the unit's ordinary tasks is to offer the guidance for the government's crisis management.

"In the 2004 documents, there was nothing like martial law or the garrison decree and the mobilization of troops," he stressed. 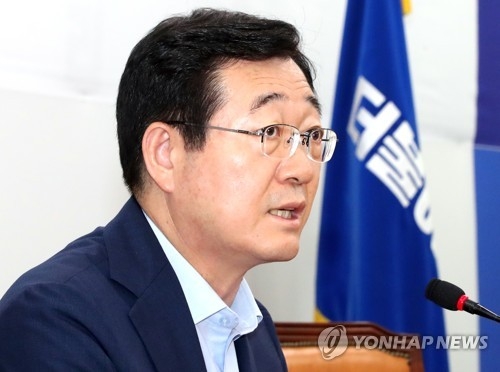