GUMI, South Korea, Aug. 3 (Yonhap) -- A woman in her 40s was found dead on Friday after sleeping inside a coffin as part of a religious ritual aimed at driving out misfortune, police said.

The 47-year-old, whose identity was withheld, first entered the coffin around 8 p.m. Thursday as part of the ritual at the home of an acquaintance in the southeastern city of Gumi and came out of it two hours later, citing difficulty breathing, according to police.

But she entered the coffin again after the acquaintance and another participant in the ritual told her to try to hang on a little longer, and the two others slept outside, according to police.

The two opened the coffin the following morning and found the woman dead around 6:30 a.m., police said.

Police said there was no sign of nailing on the coffin's cover and that the women could have fallen into a deep sleep or lost consciousness while inside the coffin.

An autopsy on her body will be performed on Saturday to find out what exactly caused her death, the police said, adding they are also looking into the possibility that she died of heat exhaustion or heatstroke inside the airtight coffin amid the heat wave that is gripping many areas of the country.

The police will also decide whether to charge the two acquaintances for negligence leading to death in connection with her death. 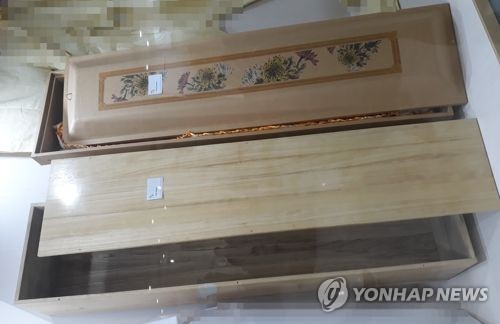 Woman found dead after sleeping inside coffin in religious ritual

Woman found dead after sleeping inside coffin in religious ritual