Recovering from a groin injury sustained in May, the South Korean left-hander tossed four shutout innings for the Dodgers' Advanced A affiliate, the Rancho Cucamonga Quakes, against the San Diego Padres affiliate, the Lake Elsinore Storm, at LoanMart Field in Rancho Cucamonga, California, on Thursday (local time).

Ryu held the opponents to two singles while striking out four. He threw 47 pitches, 34 of them for strikes.

Ryu was lifted after four innings with the Quakes leading 4-0. He's expected to make a few more appearances in the minors before he can rejoin the Dodgers' staff.

Ryu hasn't pitched in the majors since suffering the injury on May 2 in a start against the Arizona Diamondbacks. He is 3-0 with a 2.12 ERA in six big league starts with 36 strikeouts and 10 walks in 29 2/3 innings. 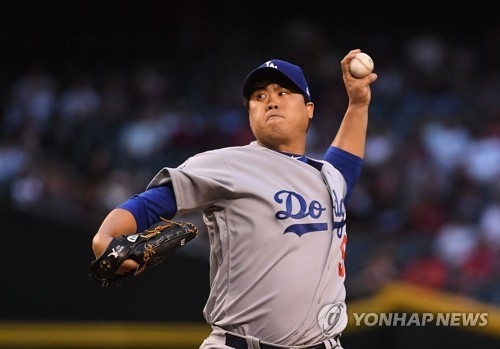 The 31-year-old is in the final year of his six-year, US$36 million contract.

Ryu worked around a leadoff single in the third inning with a flyout and a 5-4-3 double play.

The left-hander also gave up a single to start the fourth but escaped the inning unscathed with a couple of force outs and a strikeout.

Ryu has been a starter for his entire career, but there may not be any room for him in the Dodgers' rotation when he returns, with Clayton Kershaw, Alex Wood, Kenta Maeda, Walker Buehler and Rich Hill occupying spots.