SEOUL, Aug. 3 (Yonhap) -- South Korea will play a lighter schedule in the Asian Games men's football tournament after another redraw.

According to the Korea Football Association (KFA), the organizers of the Jakarta-Palembang Asian Games conducted their second redraw earlier Friday, after Iraq pulled out of the competition.

Iraq got into an age fraud scandal involving their under-16 national team, and decided to withdraw from the Asian Games.

South Korea were initially paired with Bahrain, Malaysia and Kyrgyzstan in Group E. But after the organizers learned that they'd left out the United Arab Emirates (UAE) and Palestine, they had to conduct a redraw, after which the UAE ended up in South Korea's group.

The first redraw meant South Korea would have to play four group matches in nine days. 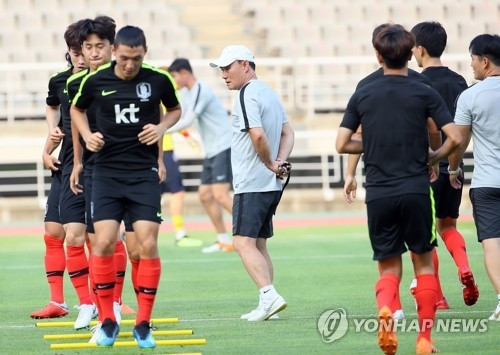 But with Iraq's absence, the UAE were moved to Group C with China, East Timor and Syria.

South Korea will open their Asian Games title defense against Bahrain on Aug. 15. Before the latest redraw, their first match was scheduled for Aug. 12.

South Korea will then play Malaysia on Aug. 17 and Kyrgyzstan on Aug. 20. All matches start at 7 p.m. local time at Si Jalak Harupat Stadium in West Java, about 130 kilometers south of Jakarta.

The opening ceremony of the Asian Games is Aug. 18, but football will start a few days in advance to get all group and knockout matches in.

South Korea are scheduled to depart for Indonesia on Aug. 8, though the departure schedule might change now that the first match has been pushed back by three days.