SINGAPORE, Aug. 4 (Yonhap) -- U.S. Secretary of State Mike Pompeo on Saturday pressed Russia and some other countries to strictly enforce U.N.-led sanctions on North Korea, warning his country would take "very seriously" any move to undermine efforts to denuclearize the communist nation.

His warning in front of international media in Singapore came amid "credible" reports that Russia has allowed joint ventures with North Korean companies and issuing new permits for its "guest" workers in violation of U.N. Security Council resolutions.

A fresh U.N. report said as well that North Korea has benefited from a "massive increase" of illegal ship-to-ship transfers of oil products at sea to evade sanctions.

U.S. officials are also concerned by intelligence reports that the secretive North is building new missiles and nuclear bombs despite the Sentosa agreement between their leaders on June 12.

Speaking to reporters here, Pompeo emphasized that Washington's goal is to achieve the "final, fully verified denuclearization" of the North.

"It is clear, our partners and allies within ASEAN know how important the denuclearization of North Korea is for their own security. I called on them to strictly enforce all sanctions, including the complete shutdown of illegal ship-to-ship transfers of petroleum destined for North Korea," he said. 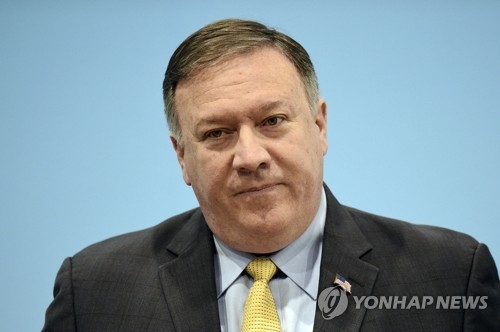 He's in the city-state to attend a set of annual sessions involving the Southeast Asian countries and their dialogue partners.

North Korea's top diplomat Ri Yong-ho is also traveling to Singapore as his country is a member of the ASEAN Regional Forum (ARF).

Pompeo urged "all countries" to abide by the U.N. resolutions against Pyongyang.

"Any violation that distracts from the world's goal of finally fully denuclearizing North Korea would be something that America would take very seriously," he said.

A day earlier, the Trump administration announced its own new sanctions on the North involving Ri Jong-won, a North Korean official who serves as the Foreign Trade Bank deputy representative in Moscow.

Also affected are the Korea Ungum Corp. in Pyongyang, the Dandong Zhongsheng Industry and Trade Co., Ltd., based in China, and the Agrosoyuz Commercial Bank, an entity in Russia.

The measure is a show of Washington's resolve to maintain sanctions on Pyongyang until its complete denuclearization.

"The United States will continue to enforce U.N. and U.S. sanctions and shut down illicit revenue streams to North Korea," Treasury Secretary Steven Mnuchin said in a statement. "Our sanctions will remain in place until we have achieved the final, fully verified denuclearization of North Korea." 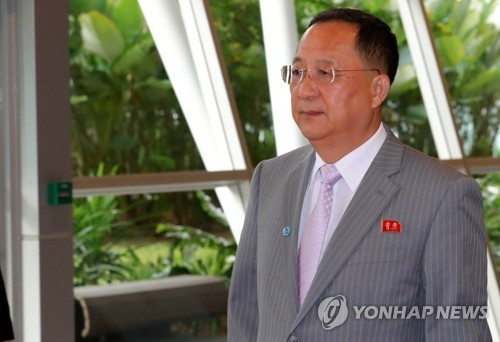 The North's foreign minister, meanwhile, focused on persuading other countries to ease or lift sanctions on his regime.

Ri had a string of bilateral meetings Friday with fellow ministers visiting Singapore, who include those from China, Indonesia, Vietnam and Thailand.

He reportedly requested the easing of sanctions and an improvement in bilateral state relations.

He encountered South Korean Foreign Minister Kang Kyung-wha at a gala dinner later in the day but rejected an offer of formal bilateral talks.

On Saturday, Ri met separately with his Filipino counterpart before attending the ARF plenary session, another source said.