SINGAPORE, Aug, 4 (Yonhap) -- A top North Korean official on Saturday accused the United States of dragging its feet in building mutual confidence despite their landmark Sentosa summit accord.

Speaking at the ASEAN Regional Forum (ARF) in Singapore, Foreign Minister Ri Yong-ho stressed that it's important for both sides to take "simultaneous actions and phased steps."

He cited a set of measures Pyongyang has recently taken including a moratorium on nuclear and missile testing and the removal of a major nuclear site.

"However, the United States, instead of responding to these measures, is raising its voice louder for maintaining the sanctions against the DPRK and showing the attitude to retreat even from declaring the end of the war, a very basic and primary step for providing peace on the Korean Peninsula," he said, according to a English transcript of his speech. The DPRK is the acronym for the North's official name, the Democratic People's Republic of Korea.

The transcript was released by the North's delegation following the closed-door session joined by the top diplomats of more than two dozen countries, including U.S. Secretary of State Mike Pompeo. 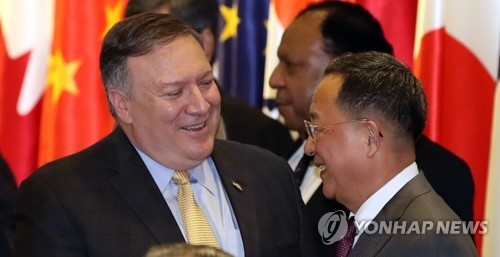 Ri stopped short of directly criticizing President Donald Trump, saying what's alarming is the "insistent moves manifested within the U.S. to go back to the old, far from its leader's intention."

Trump had talks with the North's leader Kim Jong-un on the Sentosa island of Singapore on June 12. They produced a four-point joint statement on denuclearization and improved relations between the two sides that fought each other in the 1950-53 Korean War.

Under the deal, the North last week repatriated the remains of 55 American service members killed in the conflict.

The implementation of the other summit agreements has been quite slow. The North, supported by South Korea, demands the end-of-war declaration as a bridge to a formal peace treaty to replace the Armistice Agreement.

South Korean officials agree that it could help facilitate denuclearization.

Still, the U.S. wants the North to take concrete denuclearization steps such as presenting a timetable or a list of its nuclear arsenal.

U.S. officials are also upset by reports that some countries are expanding economic ties with the North in violations of U.N. Security Council sanctions resolutions. The reclusive communist nation is said to be building new missiles and producing nuclear materials as well.

On his visit to Singapore this week, Pompeo urged the international community to maintain sanctions on Pyongyang until its "final, fully verified denuclearization."

Ri and Pompeo shook hands and briefly conversed with each other at the opening photo session of the ARF earlier in the day. There has been no news of a plan for formal talks between them.

On his Twitter account, Pompeo said his team delivered Trump's reply to a letter from the North's leader.

Sung Kim, the State Department's top Korea expert who serves as ambassador to the Philippines, was spotted handing over an envelope of documents to Ri after the photo availability.
lcd@yna.co.kr
(END)