SEOUL, Aug. 5 (Yonhap) -- U.S. beef and pork imports surged in the first half of 2018, expanding their presence in the South Korean market, a research institute said Sunday.

According to the Korea Rural Economic Institute (KREI), both types of meat are rapidly increasing their market share in Asia's fourth-largest economy, with beef solidifying its status as No. 1 among all imports and pork now in a position to usurp imports from the European Union for the top slot.

Data showed that in the January-June period U.S. beef imports reached 106,000 tons, up 18.7 percent from a year earlier. American beef has been the best-selling of all imports since 2017, with numbers showing it will further distance itself from second- and third-ranked Australia and New Zealand meat, respectively.

South Korea imported 96,000 tons of Australian beef and some 10,000 tons of meat from New Zealand, both posting gains of 1.4 percent and 6.9 percent, respectively, from the year before.

The increase is noteworthy since the average price of American beef is higher than that of its rivals.

Seoul imported a little over US$760 million of beef from the U.S. in the first half, up 33 percent compared with the same period in 2017. 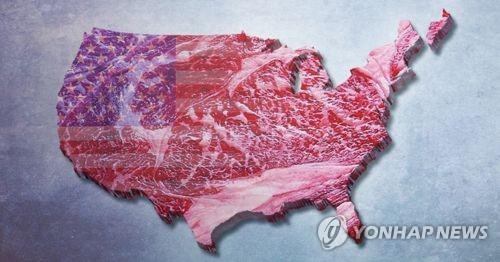 The numbers represent a 38.5 percent increase from the previous year, with the growth rate being significantly higher than 6.4 percent gain for European pork. This translated into a 38 percent market share for U.S. pork. Pork from the E.U. made up 47 percent of all imports in the first half, down from 51 percent last year.

"The sharp growth in U.S. imports means the gap with European pork is narrowing, with this trend to continue going forward," a KREI source said. He added that average price of U.S. pork has been rising, while those from Europe has dipped.

The state-run institute, meanwhile, said South Korea's farm imports reached $17.7 billion in the six months that ended in June, up a solid 9.5 percent compared with the year before.