SEOUL, Aug. 5 (Yonhap) -- A committee of North Korea's ruling Workers' Party denounced the recent extension of a U.S.-Japan nuclear pact Sunday, arguing that Tokyo has a large stockpile of plutonium in pursuit of nuclear armament.

In the Rodong Sinmun, the daily of the ruling party, the Korea Asia-Pacific Peace Committee published a white paper titled "Revelations on the black curtain of the tacit move by the U.S. and Japan to extend the nuclear agreement."

Last month, the 1988 nuclear agreement was extended automatically as neither side took steps to review it before the end of its term. The pact has allowed Japan to reprocess spent fuel and extract plutonium, though the country limits its nuclear energy utilization to peaceful purposes, such as electricity production.

"Since the U.S. granted Japan the right to reprocess spent fuel through the nuclear agreement in 1988, Japan has been pushing to stock up on plutonium for nuclear armament over the last 30 years," the committee said in the white paper.

The committee, then, berated Washington for its "dual" stance.

"(The U.S.) is encouraging (Japan's) nuclear armament by automatically extending the nuclear pact, while it calls on us to take more trustable (denuclearization) measures or raises suspicion about (our) denuclearization (efforts)," it said.

The criticism came as Washington reportedly is pushing Pyongyang to take tangible denuclearization steps, such as a full declaration of its nuclear and missile programs, while the communist regime demands that the U.S. agree first to the declaration of a formal end to the 1950-53 Korean War so as to help ensure the security of its regime.

During the historic June summit between U.S. President Donald Trump and North Korean leader Kim Jong-un, the two sides agreed to pursue the "complete denuclearization" of the peninsula without specifics on the timeline and methods for the North's nuclear disarmament. 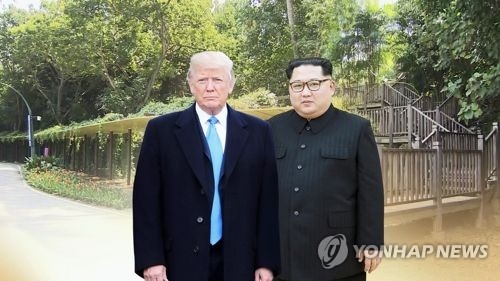